Sometimes you can’t go back. Or, at least, you shouldn’t. It’s now almost 25 years since the show first aired in 1992, with various sporadic revivals since the end of its first run, four years later – it’s almost like Saunders resurrects it whenever she needs a mortgage payment. This is probably the first I’ve seen of it in at least a decade and a half. The relationship at its core – Edina (Saunders) and Patsy (Lumley), as teenagers who never grew up – has aged well enough. However, it’s not something capable of sustaining a feature-length story, no matter how many celebrity cameos you throw in. And here, that would be many, many cameos, a good number of which I suspect flew right past me, being peculiarly British and/or ephemeral and/or industry luvvies. There were times when this felt more like an entry in the Sharknado series than an actual sit-com. 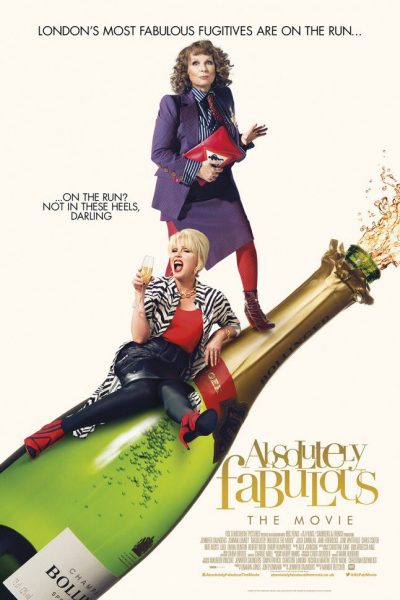 The comedy of errors which is the story gets going when our aging alcoholic reprobates are apparently responsible for the drowning of Kate Moss, Edina having pushed her off a balcony at a Thames-side party. Besieged and cut off from the wealth necessary to sustain the lifestyle to which they have become accustomed, they abscond with Edina’s teenage granddaughter, Lola (Donaldson-Holness), to the South of France, where Patsy intends to marry her super-wealthy old flame (played by Barry Humphries), so she and Edina can return to being idle and rich. Things don’t quite go as planned, and Patsy instead ends up having to impersonate a man, in order to marry the richest woman in the world.

I can’t say I hated this. Lumley remains a true comic gem, and watching her delivering venomous lines like a spitting cobra was always a pleasure. The sequence where the pair are on the plane to France was a genuinely brilliant skewering of unfettered, privileged idiocy, culminating in Patsy being tazed by a stewardess and barely even noticing. [File it alongside the plane scene in Sexy Beast!] But moments like that were outnumbered by those where a reliance on nostalgia was all that the film could offer, wheeling on old members of the cast to no actual purpose. The show’s comedic strength, to me, was about the triangle between Edina, daughter Saffron (Sawalha) and Patsy, with the two last-named pulling on Edina in opposite directions. The film broadens the scope and, as a result, it diluted itself to the point where this seemed more an afterthought.

Some of the cameos do work: Lulu, of all people, was among the most memorable, and I imagine if you’re a devoted fan who has kept up with the various incarnations of the show, you’ll likely get a lot more from this than the casual viewer. But it is a fair question to wonder what someone with no previous knowledge of the show would think. I dread to imagine the opinion of any viewer who came into this, unaware of the characters and situations depicted, because it would likely seem like a complete mess, despite the best efforts of the two leads.