“So, more dinosaurs on a stick, then?” said Chris sardonically, when I informed her of the title for this evening’s Hammer entry. I can’t blame her for some cynicism, after watching One Million Years B.C. get shamelessly recycled into a lesser entity, When Dinosaurs Ruled the Earth. This seemed like another meal made from the same ingredients: cavegirls in bikinis, hairy mates battling for their affections, and stop-motion anachronistic creatures of variable quality trying to eat everyone, perhaps with some kind of natural disaster for variety. These prejudices were only largely met. If you’re expecting some connection to the later seventies vehicles for Doug McLure, The Land That Time Forgot and The People That Time Forgot, you will also be disappointed.

The law of diminishing returns is kicking in. Million scored a 5.7 on the IMDb; Dinosaurs dropped to 5.2; and this could manage only a 4.5. That ranks it 93rd among 94 Hammer movies, ahead of just poor Moon Zero Two (4.4). The novelty of dialogue consisting largely of grunts has indeed worn off by this point; if I wanted that kind of thing, I’d watch Jersey Shore. [Yes, hello? This is 2010 calling. We’d like our reference back…] However, to make it, Hammer strayed even further from their usual home counties base than the Canary Islands, going all the way to Southern Africa and shooting in Namibia. Local native wildlife replaced the stop-motion, so score one for historical authenticity. I must confess a sense of loss at the absence of those “dinosaurs on a stick,” though more on that later. 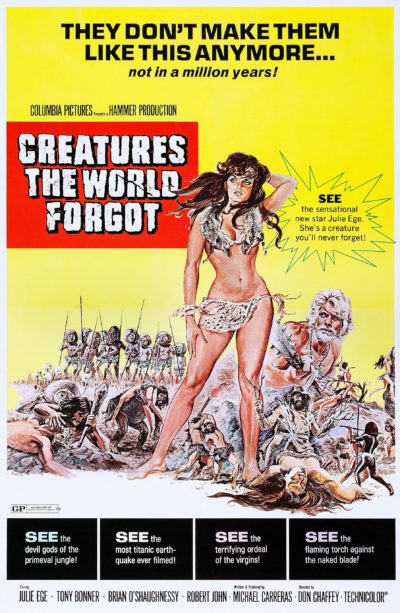 As the poster on the right shows, Hammer and their American distributors were fairly shameless in cashing in on the success of Million. Indeed, an open casting call was announced for the lead role, though this may have been no more than a publicity stunt. The part went to the Norwegian Ege, who like Victoria Vetri before her had been a glamour model, appearing in the May 1967 edition of Penthouse. She was also one of Blofeld’s girls in On Her Majesty’s Secret Service, alongside other Hammer ladies Jennie Hanley, Anoushka Hempel and Joanna Lumley. The same year as this, Ege appeared in Up Pompeii, a comedy starring Frankie Howerd which was one of the biggest hits of 1971 at the British box-office. Creatures? Not so much.

This does not screw around. Right from the start, after an opening shot that reminded me of the beginning of Cat People, we are driven, face-first, into the brutality of primitive life, joining a hunt in progress, for an oryx (why, I’m glad you asked. It’s a type of antelope with extremely long horns). It does not go well for the oryx. Let’s just say, I don’t know exactly how endangered they were in 1971, but the answer would appear to be “slightly more so after the shooting of this film.” Put another way, I don’t think it was a stunt oryx being carted back to the cave people’s lair and enthusiastically dismembered. This casual savagery sets the tone, with early man being generally unpleasant to fellow primitive man, the local wildlife and, in particular, primitive woman. The notion of “informed consent” appears a conceit of modern civilization.

The credits don’t name anyone, giving them all descriptors instead like “The Fair Boy”, “The Old Crone”, or my personal favorite, “The Dumb Girl” – which just means she doesn’t grunt like everyone else. However, names do appear to exist, so I’ll use them here. It’s mostly the story of non-identical twin brothers, blond Toomak (Bonner) and dark-haired Rool (John). Proceedings take place over quite a long span, beginning before the pair’s birth, but mostly concentrating on the struggle for power between the siblings, who both want to succeed their father as ruler of the tribe. Despite beating Rool in ritual battle, Toomak decides to leave, along with Nala (Ege) and a good chunk of the trible. Rool, however, is having none of it, and follows his brother, intent on besting him. 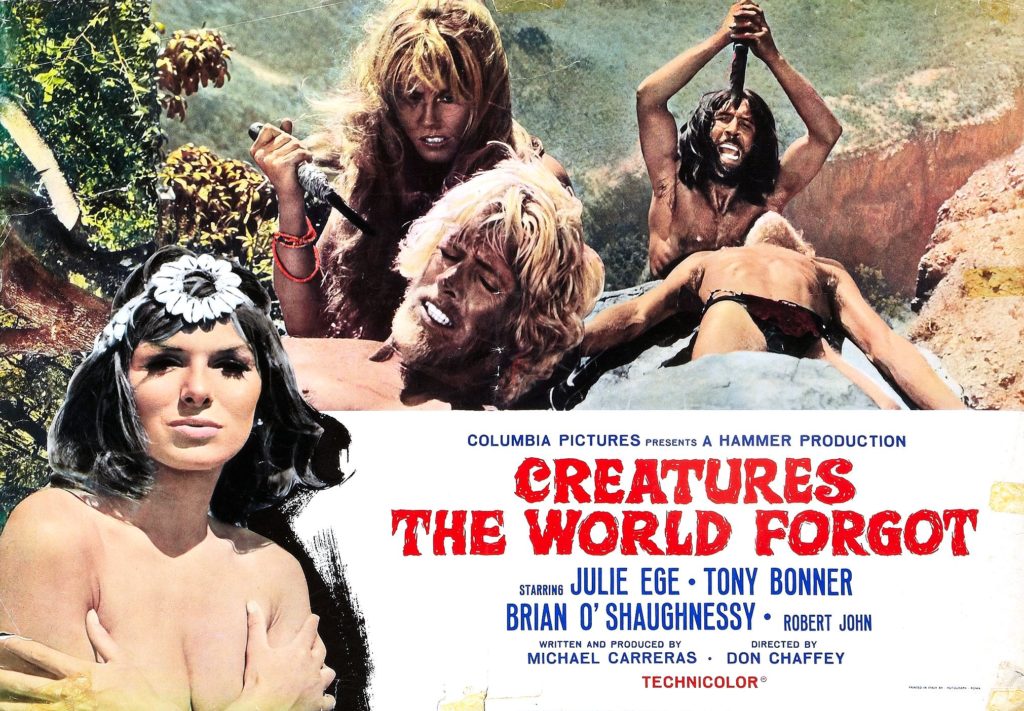 That’s the basics; I’m sure there’s more, yet it’s hard to get past the broad strokes. I kept feeling this really needed some narration by David Attenborough to fill in the blanks and clarify a few important points. I do feel that losing the dinosaurs was indeed a mistake, since they have considerably more attraction than the selection of more prosaic animals we get here. I mean, which would you rather see? A T-Rex, or some ratty looking wildebeests, hyenas and a guy in a very sad-looking costume pretending to be a bear? I’ll take low-rent stop-motion animation over a third-rate safari package, any day. Even the volcano footage which occurs early on, seems to have been borrowed from Million – also directed by Chaffey, so perhaps he was trying to capture some of that same lightning in a bottle here.

Sadly, he largely failed, with few moments that stick in the mind, beyond the overall grubby tone, almost approaching mondo levels of brutality. Ege struggles under the weight of a gigantic brunette wig, and makes little or no impression, especially compared to her predecessors. I will say, the Namibian landscape is occasionally spectacular, in particular during the finale which sees Rool kidnap Nala and tie her to a tree – there presumably being no train tracks to hand. Toomak and a large python then show up (shown, top), albeit with different agendas. Otherwise, the only sequence that I remember is an almost surreal attack by a tribe. sporting over-sized clay heads that are genuinely creepy, making bizarre sounds that help enhance the weird atmosphere. In a film apparently attempting to be “realistic”, it’s significant that it’s a rare moment of imagination which sticks in the mind.

“They don’t make them like this anymore…”  proclaims the poster. I can’t argue with that – but all told, I’m far from convinced that isn’t a good thing. The fact that this was Hammer’s last foray in prehistoric pulchritude seems to suggest they came to the same conclusion.