“It’s like Groundhog Day – with violence!” I can see that as the elevator pitch for this, and some Hollywood executive immediately reaching for his cheque book. I don’t blame him. This is a heady blast of over-the-top mayhem, clearly both inspired by and styled after video games. It’s on rather shakier ground when trying to explain itself, or provide emotional depth to the carnage. However, the action is robust and energetic, and provides sufficient momentum for the film to coast through the slacker periods, until the next shot of adrenaline arrives. 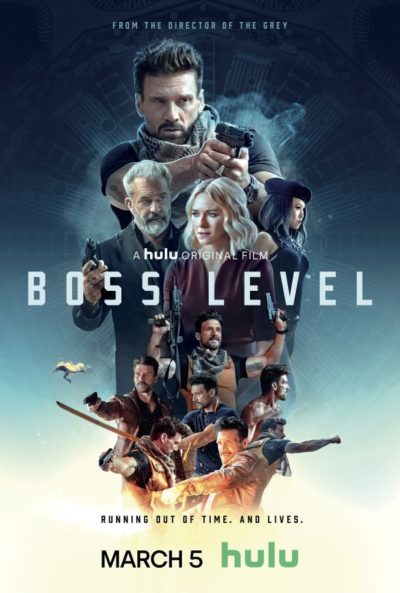 Ex-special forces soldier Roy Pulver (Grillo, still looking like Duke Nukem made flesh) is living the same day over and over. It begins with an assassin trying to kill him in bed, and continues with… Well, other assassins following suit, until one inevitably succeeds. The day then restarts. He’s gradually living further into proceedings – fortunately, he carries his memories forward. This unusual situation seems to be related to his other half, scientist Jemma Wells (Watts), who works for shady military-industrial operative Colonel Clive Ventor (Gibson) on a secret project of potentially apocalyptic results. But it’s kinda hard for Roy to figure out what’s going on, given the lethal distractions.

This could have ended up being nothing more than watching someone repeatedly play the same level of a video game, but Carnahan does a really good job of mixing it up. The killers after Roy are a slew of quirkily off-beat characters, such as the Chinese swordswoman who introduces herself after each time she kills Roy: “I am Guan Yin, and Guan Yin has done this.” The key to defeating her, unsurprisingly, is getting lessons from an even better swordswoman, who conveniently is having lunch in Roy’s favourite Chinese restaurant. That she’s played by Michelle Yeoh tells you all you need to know about the approach here.

The efforts to provide weight to proceedings seem contrived and clunky, in comparison to the breezy slaughter. There’s a subplot about Roy’s young son, with whom he has lost connection, and they have to bond over a shared love of eighties video-games. Okay, Roy fakes it, and his son (played by Grillo’s actual son) is probably the only 12-year-old ever to appreciate content produced a quarter-century before he was born. That kind of shit only happens in the movies. Similarly, the relationship between Roy and Jemma is unconvincing; you can’t believe they would ever have been a real couple.

It’s better when concentrating on Roy’s battle to survive, or his attempt to figure out what’s happening and how he can break out of this loop. The script includes nods to things like Egyptian mythology, yet does a good job of keeping things sensible, rather than toppling into Nolanesque levels of complexity. For this is concerned, first and foremost, with giving the viewer an entertaining experience. That it embraces wholeheartedly the “Recommended for mature viewers” label Hulu stuck on it, is merely a bonus.