This slice of hicksploitation kicks off with us being introduced to a trio of bikers, led by Teach (Kent). Their attitude is clearly shown by a bit of casual sexual assault, accompanied by some cheerful and upbeat bluegrass music. Mind you, everything in this movie is accompanied by some cheerful and upbeat bluegrass music, so let’s not read too much into this. They end up getting arrested after their female seat-warmer is stabbed during a fight with a local at the gas station. Simultaneously, the feds – the lead FBI agent is played by renowned disk-jockey Casey Kasem! – are in town, pushing the local sheriff (a wonderfully laid-back performance by Jack Starrett) to deal with the local moonshine producers. He’s reluctant to upset the unwritten non-aggression pact with them, but eventually stages a raid on one of the stills run by the Utley sisters. 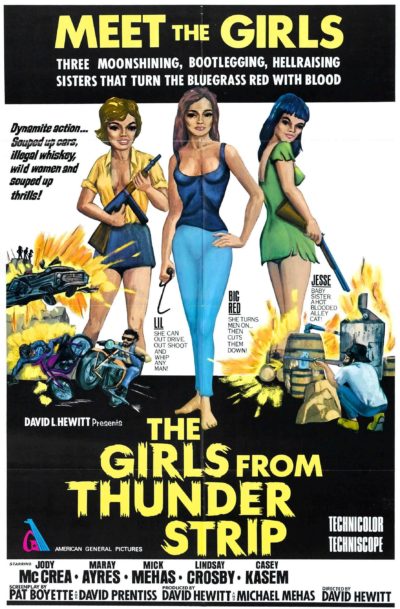 While the operation is botched by the largely comedic relief authorities, it ends up with one sister arrested. Albeit only briefly, as Red (Ayres) breaks her sibling out at gunpoint. The bikers bribe Red to take them with her, but as soon as they return to the Utley’s hangout, it’s clear Teach and his crew have other plans in mind. They will be laying down some new sleeping arrangements, for a start, and any concerns Red and her sisters might have are unimportant. It ends with the bikers driving off (for some reason, they have abandoned the whole motorcycle thing in favour of a car), with the women as their prisoners. It’s up to their loyal ally, Pike (McCrea), to follow after them and come to the rescue.

Despite a great poster, the trio of women are not the focus that I hoped they would be. I’m not quite sure who is, however. At one point it looked like it would be cops vs. bikers. Then cops vs. moonshiners. But it ends up being mostly Pike vs. bikers, with the police and FBI appearing to give up, even though more than one of their number is killed in the breakout and subsequent car-chase. The problem is, Pike is certainly among the least interesting characters in any of the factions, with McCrea showing no charisma or personality in his portrayal.

The film even manages to botch the more exploitative elements. You’d expect a movie like this to amp up the gratuitous nudity. Yet even the scene where one of the Utleys is caught bathing by the cops (top), offers nothing more salacious than her lingerie. Outside of one head-shot which is shocking in its unexpected suddenness, the violence has no impact either. Instead, there is too much footage of people moving from one place to another – either walking, on bikes or in cars – and while there are aspects which work, these are reduced to little more than incidental background elements. If I’d seen this in its natural environment of the drive-in, I’d have slashed the seats…