This has a bit of a reputation, being one of the sleazier entries in Cushing’s filmography. That’s especially the case for the “European” cut, which is rougher, with nudity not present in the British/UK release.  But Cushing manages to elevate the material, bringing his usual presence to his role, and making it more sympathetic than you’d expect. At least, until a finale which throws much of what had gone before away, and goes off the rails. 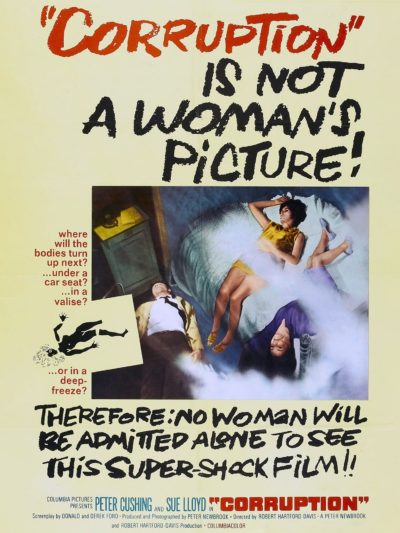 He plays doctor Sir John Rowan, whose girlfriend, Lynn Nolan (Lloyd), is a model. An argument at a party leads to an accident which leaves Lynn with a disfigured face. John feels responsible, and begins researching treatment that can repair the damage. Using a pituitary gland extracted from a corpse, he does return Lynn’s face to its former glory. However, the improvement proves only temporary, and Rowan believes to make the cure permanent needs… fresher ingredients, if you know what I mean, and I think you do. If this sounds a bit familiar, it’s not dissimilar to Georges Franju’s Les Yeux Sans Visage, in which a guilt-burdened doctor transplants faces onto his disfigured daughter.

The first victim is a prostitute, whom Sir John decapitates in order to reach the necessary gland. But even that doesn’t offer the hoped-for resolution. He and Lynn head for their seaside cottage, bringing his equipment with them, including a high-powered medical laser (it was the sixties – lasers were cool). They pick up a nomadic beat girl, intending to make her a pituitary donor, but she turns out to be in cahoots with a gang of young thugs. Her unexpected departure forces Rowan to target a woman in a train carriage. Before he can carry out the procedure, the beat girl returns, followed by the rest of the gang, intent on robbing what they perceive as an easy target.

This is where it all goes wrong. To that point, it had been an effective character study of an overly attached boyfriend, anchored by Cushing’s performance. For a mad doctor, Rowan is surprisingly sympathetic, the actor bringing much the same depth as to his portrayals of Baron Frankenstein. Lynn, on the other hand, comes over as an increasingly manipulative bitch, who is happy to sacrifice others to the cause of her pretty face. I was expecting the final reel to involve Sir John perhaps going after the pituitary of Lynn’s sister, Val (O’Mara), as the best match. Instead, it makes a right turn into a home-invasion pic.

Worse follows, Remember that laser? It goes berserk. Yes, you read that correctly. Y’know, I didn’t think lasers had recoil. But when this goes off, it starts thrashing about like an unattended fire-hose, setting fire to anything and anyone in its path. Meanwhile Sir John brawls with the thugs and fellow doctor Steve Harris (Trevarthen), who has pegged the slew of decapitations on his pal. Then there’s a coda, which… No. Just, no. It’s a pity, as the preceding elements deserved considerably better than a thoroughly ridiculous finale.