Bob Odenkirk, action hero. Those are words I did not expect to be writing in 2021. Yet here we are, with what looks likely to be the breakout performance in that genre this year. I’ll confess to falling asleep in Naishuller’s previous feature, Hardcore Henry, which seemed like a single-note gimmick. This, however, proves a slick and well-directed bit of hyperviolence, taking an everyday man and turning him into a ruthless killing machine. Well, kinda. It begins with a home invasion at the residence of Hutch Mansell (Odenkirk), where he freezes in the face of an opportunity to take action. An apparently mild-mannered sort, he ends up seeking out the perpetrators, only for a chance encounter on a bus to send things out of control. For he brutally beats up the brother of Russian mob boss, Yulian Kuznetsov (Serebryakov), who vows revenge. Except, Hutch isn’t exactly as mild-mannered as it initially seems. 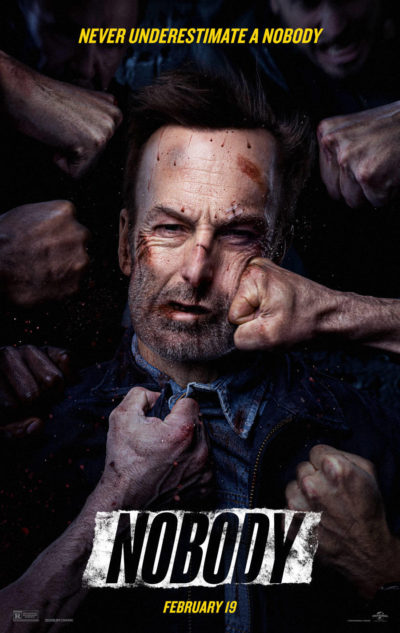 I hadn’t heard much detail about this going in. Initially, it seemed to be pushing the humdrum nature of Hutch’s life, and I wasn’t sure how far down the “snapped vigilante” road it would go. I was thinking this might be in the same vein as Falling Down, with a microaggression – there, a denied breakfast, here a missing bracelet belonging to his daughter – triggering a rampage. Turns out, it’s not that close: it’s more a prompt than a true motivation. Instead, there’s a sense of John Wick here, and it shares writer Derek Kolstad with that franchise. It also has story elements in common: Russian mob antagonists, and a reluctant hero who has stepped away from violence, and now just wants to get on with his life. His life, however, clearly has other plans. Hutch feels like the character John might have become, if allowed to settle down with his wife, moving to the suburbs to start a family. Though Odenkirk is only a couple of years older than Reeves, his character in this seems much more world weary.

A lack of originality is about the only negative I can find here, with just about every other aspect hitting its mark. The supporting cast is stalwart, including genre regulars like Christopher Lloyd, Connie Nielsen and Michael Ironside, while Serebryakov makes for a decently scary opponent. It is, however, the action which will stick in the mind, most particularly the bus scene. It’s a superbly well-staged piece of action, also essential to the plot, by offering Hutch a chance at redemption, after failing to protect his own family. You can almost sense his subconscious willing his enemies to take action, so that Hutch can respond with justification. It may be the most important sequence in the movie too, because it needs to sell the audience on the concept of Bob Odenkirk, action hero. Its success in so doing greases the path for the rest of the film, and Naishuller takes full advantage, delivering steadily more explosive (if less plausible) mayhem until a very satisfactory and incendiary finale.