While we first bumped into him back in the nineties with The Delivery, Reiné has subsequently almost made a career out of jumping on to sequels. Among the action films he has directed – without being involved in any of the originals – are: The Marine 2, Death Race 2, The Scorpion King 3, The Man with the Iron Fists 2, 12 Rounds 2 and The Condemned 2. This falls in the same category – a straight to video follow-up to a “known” property. Here, 23 years after the original, which was John Woo’s first Western movie. Though there’s little connection to its predecessor, save for the general theme of “rich people hunting humans.” 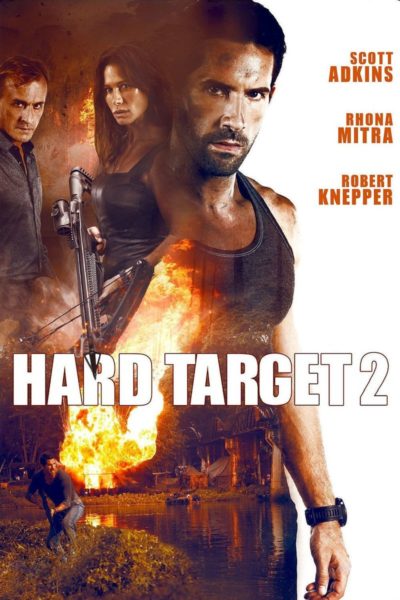 The film relocates to South-east Asia, where MMA fighter Wes Baylor (Adkins) has gone after accidentally killing his best friend in a Vegas contest. Now, he alternates bouts of drinking with unsanctioned fights. He gets an offer of a huge payday from Jonah Aldrich (Knepper) for one match. Except, it’s just a ruse, with Wes becoming the target for a group of wealthy hunters, who have paid Aldrich for the privilege of an unusual prey in Myanmar. If Wes can escape over the border to Thailand, he’ll be free and get his payday. Naturally, they’ve bitten off more than they expected in Baylor. He teams up with local girl Tha (Truong), whose brother vanished in mysterious circumstances, to make their way through the jungle toward the frontier, with Aldrich and the hunters in hot pursuit.

It’s a fairly basic story, and wisely, Reiné keeps it that way. There’s a steady stream of action sequences, ranging from the decently competent to the largely ridiculous. The latter would include the motorcycle which suddenly sprouts machine guns and missile launchers from the handlebars. But most of the fights are good hand-to-hand work. It’s clear why Adkins’s back is now giving him trouble, though the most memorable death comes at the end of a fight between Tha and huntress Sofia (Mitra, sporting a nice line in shiny, entirely jungle inappropriate pleather). I just wish they’d made more use of JeeJa Yanin. She shows up as part of a group who take Wes on at the end. If you’ve seen her in Chocolate, you’ll know she’s capable of being much more than Generic Local Thug #4.

Reiné has a decent style, and it’s not over-edited, though he seems a bit over fond of drone footage. There’s also a scene which has Wes walking in slow-mo, as white doves flutter around. It’s clearly a Woo tribute, and I found myself kinda wishing they hadn’t bothered. It’s better when going its own road, albeit rarely reaching a level much above okay entertainment. Outside of Sofia, the villains are especially bland, and it is probably this area where the original movie is most superior. There’s definitely nobody to compare with Lance Henriksen’s Emil Fouchon. However, nice use of locations like the Burma railroad make up for some of the shortcomings, and we did not feel we had wasted the time spent watching this.