I don’t mind the concept of social commentary in genre films, but it really needs not to be the primary focus. Dawn of the Dead, They Live or Get Out, work on their own terms, regardless of whether you agree with (or even notice) the points being made. I’m not sure the same can quite be said of Hunted, which appears to take inspiration from the fairy tale of Red Riding Hood, but casts it against a background of toxic masculinity. It felt as if this got in the way of its own story as much as it enhanced things, however. Give me subtlety over earnestness, any day. 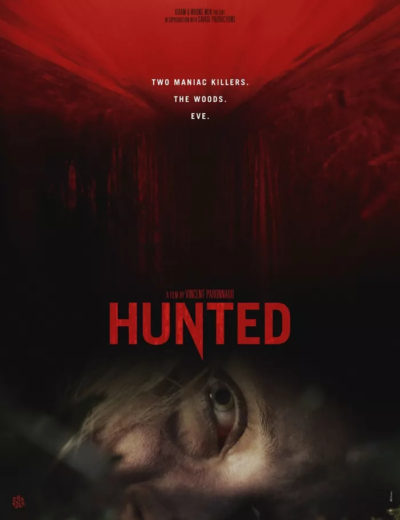 The heroine is Eve (Debay), a French manager on a construction project, whose life is plagued by unpleasant men of all flavours: her demanding boss, clingy boyfriend, and even a drunk asshole at a bar, who won’t take no for an answer. She is rescued from the last-named by another man (Worthalter), and they end up in the back of his car. Which is fine, until his accomplice (O’Brien) gets in the front seat, and drives them off; the man’s video camera (and our knowledge of genre tropes) indicates something highly unpleasant is intended. They end up deep in the forest, where a car accident caused by an animal in the road gives Eve the chance to escape. But having seen their faces, the men have no intention of letting her get away, and the hunt is on.

The beginning and end of this are considerably more successful than the middle, which is less “stalk ‘n’ slash” than “stalk… and stalk… and stalk some more.” There is a lot of wandering around the woods. The opening does a nice job of setting the mythic groundwork, with an animated sequence which tells the story of a previous visitor to the woods, who was saved by the wolves. Of course, there are no longer any in the area. Or are there? Similar, once you get past the hour mark, the pace quickens considerably, with Eve and her pursuer closing in on each other, and others getting involved. Though the latter is a bit of a mixed blessing: they encounter a mother and her son in the woods, who seem significant, before the script appears to forget about them suddenly.

When the film’s script threatens to collapse, the visual side is more consistent. Paronnaud is a comic-book writer, and brings a similar sense of style here, even if –  except for the cartoon sequence – this is light years removed from his best-known previous work. That would be Oscar-nominated animated feature Persepolis, which he co-directed. There are a number of interesting flourishes, even if these may or may not make sense, such as the blue pepper spray applied to Eve, which leaves her face looking like Boadicea’s European cousin (top). It’s not quite enough to balance the “all men are bastards” narrative, with the film putting its message before the medium.