Even though it has been a decade since the original movie – doesn’t time fly? – this still has something of the feel of a shameless cash-grab, in its lack of invention. If you’d told me this had been released nine months after Zombieland, I’d have believed you. For the majority of its ideas seem recycled, either from its predecessor, or from other zombie films. It’s probably telling that the element which gave us most joy, was about the only one which felt fresh and original. New to the team is Madison (Deutch), a bubble-headed bimbo encountered by Columbus (Eisenberg) at a mall, and who seems thoroughly unsuited for life in the zombie apocalypse. Peak blondness is achieved in the amusement she gets from a pair of binoculars. 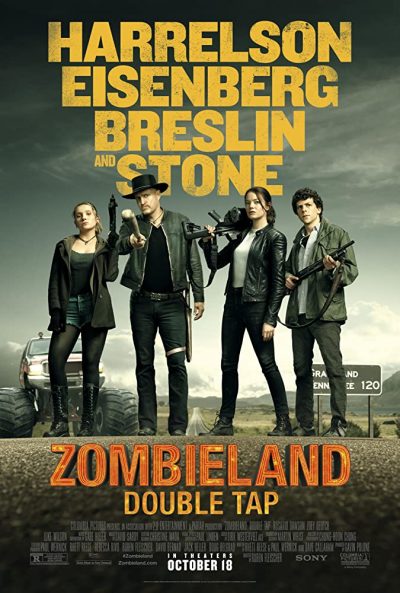 For the rest, it’s probably safe to say, if you enjoyed Zombieland, you will be at least adequately entertained by this, though perhaps not much more. It’s another trip for Columbus, Tallahassee (Harrelson) and Wichita (Stone) across the post-devastation American landscape; they’re seeking Little Rock (Abigail Breslin), who ran off with a hippie pacifist to live in a commune. Insert the usual riffing on pop culture, with Elvis Presley the main target, in place of Bill Murray [He does show up in a mid-credits sequence which shows us how the outbreak began, during a press junket for Garfield 3: Flabby Tabby] Expect more rules, more zombie kills of the week and more bickering between all concerned parties.

The most egregious bit of theft is likely the way Team Columbus meet up with another set of survivors, who are just like them, e.g. Flagstaff is the equivalent of Columbus, only he lives based on “commandments” rather than rules. Anyone who has seen Shaun of the Dead will be familiar with the concept, which that film handled in about one-tenth of the time, for about the same amount of amusement. Similarly, the climax, with a high-rise tower refuge unleashing fiery death from above, is more than reminiscent of Resident Evil: The Final Chapter. These aren’t exactly obscure or unknown entities from which Z:DT is lifting, and it’s a bit disappointing, given how fresh the first movie seemed.

Of course, part of the issue may be the entertainment landscape. Difficult though it may be to believe, Zombieland came out a year before The Walking Dead hit TV screens, arced like a fireball across the firmament of popular consciousness, and has now faded back to “Is that show still on?” status. Zombies, as an entity, have followed a similar path. They were still on the upswing at the time the first movie appeared, but now, typically provoke little more than a roll of the eyes, because there are hardly any new ideas left. For every One Cut of the Dead, there are several The Dead Don’t Die. While the characters here remain engaging, there’s a near-total lack of development to them. It’s never a good sign, when your film zombies have evolved more than the characters with a pulse.