One of the ecohorror films that enjoyed a brief vogue in the seventies, this has actually stood the test of time fairly well, mostly thanks to some nightmare-inducing special effects. Public health inspector Dr. Robert Verne (Foxworth) is hired by the EPA to mediate a dispute between loggers and native Americans in the depths of the Maine forests. He takes his wife, Maggie (Shire) with him, and it’s not long before they see first-hand the enmity between the tribesmen, led by John Hawks (Assante), and industry, in the shape of paper mill director Bethel Isley (Dysart). Initially, this conflict is blamed for the mutilated bodies that are turning up, though the Indians tag Katahdin, a legendary guardian of the woods as responsible. 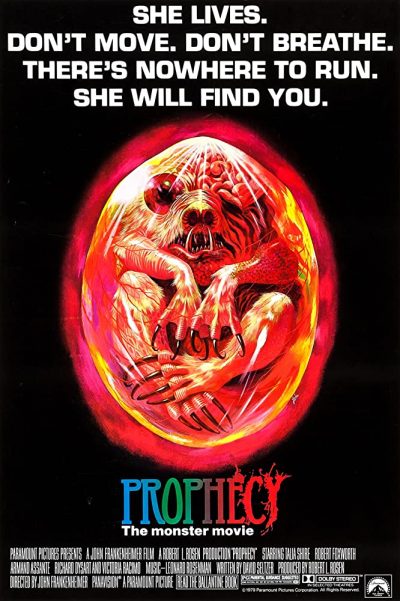 Despite Isley’s protestations about running a clean operation, the mill has been dumping toxic waste into the water table, and this is having unfortunate effects on the local wildlife.The Vernes are besieged in their cabin by a very irate raccoon, and the doctor locates a tadpole the size of a trout. Worse is to follow, when they discover two mutated bear cubs – looking rather more like flayed beavers (top) – in a salmon poachers’ net. One is alive, and they try to take it back to civilization as proof of the ecological catastrophe. But it turns out Mommy Bear – or something approximating that in size, though as deformed as her offspring – is about, and was responsible for the previous murders.

Not perhaps what you’d expect from the director of The Manchurian Candidate. Though I guess he also did Island of Dr. Moreau after Richard Stanley got canned, so knows his way around things with which science was not meant to meddle and the horrors which result. But at the time of its release, Prophecy was likely more seen an a follow-up to smash hit The Omen, also written by David Seltzer. This isn’t so good on an artistic level. But Tom Burman’s monstrous, purely physical effects generate the necessary revulsion and then some. The set-up is all designed toward the moment we finally see Katahdin and her subsequent rampage, and it’s worth the wait.

Much like that other ecoguardian, Godzilla, the humans can’t stand up to the creature – literally or cinematically. In particular, Maggie is there for only one reason. Her pregnancy, kept secret from Dr. Verne, allows her to pull increasingly concerned faces, as he goes into great detail about the mutating effects of mercury on foetuses. She has little or no agency at all of her own, save perhaps for getting to bring her cello along on the trip. The questionable casting of Assante as a Native American is exceeded in political incorrectness only by the way Dr. Verne ends up saving the natives from their own guardian. Such is the burden of the liberal white man, I guess. It’s all rather silly, certainly, yet I’ll confess I enjoyed this for the straight-faced way it embraces its own lunacy.