Back when I reviewed the previous entry, I wrote that the Final Destination series was the 21st century equivalent of the Friday the 13th franchise. We can now tick off another point of similarity, because The Final Destination proved not as definitive as the title claimed, any more than The Final Chapter was the last outing for Jason Vorhees. Indeed, FD5 came out in less time after the previous film than any of its predecessors. It is, of course, more of the same. An impending accident is foreseen by Sam Lawton (D’Agosto), who is able to save a number of people from their preordained fate. Death then sighs heavily, probably mutters “Not again…”, and starts tidying up the left-overs in gruesome and inventive ways. 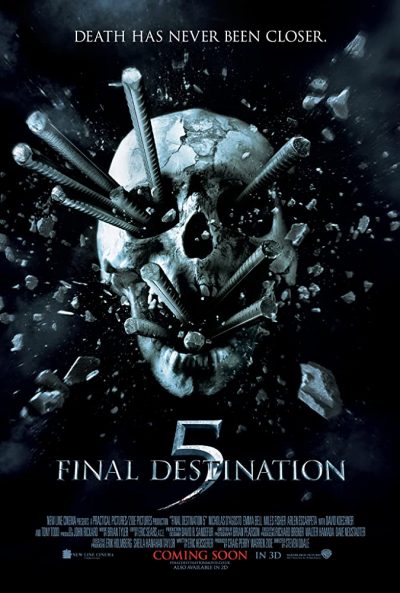 The wrinkle here is that the survivors discover they can dodge their fate by triggering the death of someone not expected to die. Their remaining lifespan then gets transferred to the person responsible. I don’t recall that being a thing previously, though with a decade since we saw the previous entry – I’m not sure quite why we took so long to watch this – I can’t say for sure. It does add an interesting new wrinkle to proceedings, with the victims having to solve the moral dilemma of whether their life is more valuable than someone else’s. It also delivers a finale which brings things full-circle quite beautifully. The mentions of Paris, which seem like just one of the film’s nods to the previous entries, e.g. the ominous logging truck, prove to be rather more than that.

But we’re here for the fatalities, which are a bit of a mixed bag. The most gruesome one, shown above, is likely the most prosaic: despite the complexity, the victim simply fails to stick the landing (unlike the movie). My personal favourite was the sleazy guy who goes for a massage, and shall we say, doesn’t get the happy ending he wants. This selection is both because he is likely depicted as the movie’s most unpleasant character, and his death is a nicely complex, Rube Goldbergian entity. It harks back to the fate of Ms. Lewton in the original movie, in the way it’s teased out, with escape dangled in front of the victim, before being snatched away. Even without the 3D in which it was made, the sequence still works. Though for large-scale carnage, you can’t been the opening bridge disaster, which includes plummeting, bisection and impalement.

With nine years having passed since this came out, the series does appear to have gone at least dormant. Considering this was the best-received entry critically, and grossed four times its budget worldwide, proving audiences still had an appetite for bodily destruction, that is a bit of a surprise. Studios don’t generally let profitable franchises fade away, and plenty of other, less successful horror entities have received reboots or remakes. However, rumblings suggest a sixth entry is now being actively worked on, focusing on first responders. I hope Death enjoyed its holiday.