By this, my third Henriks film, I was beginning to get a better handle on what to expect. So I was not, at all, surprised when this opened with a music video. Though in this case, there was a good movie world explanation, it being a creation of the self-proclaimed best, most hardcore punk band in Lower Saxony, Zeckenkommando. If only the world would recognize their talent. Perhaps it’d help if the members spent less time, frankly, dicking around e.g. heading off to the woods for the weekend to take magic mushrooms. They face an existential threat, with the sale of the building where they rehearse to a mysterious investor. They find it’s part of a conspiracy covering both the media and politicians in their town, with a cult group preparing to complete an occult ceremony which had begun in World War II. Can four punks stop them awakening the dormant Elder God Cthulhu from its Pacific slumber? 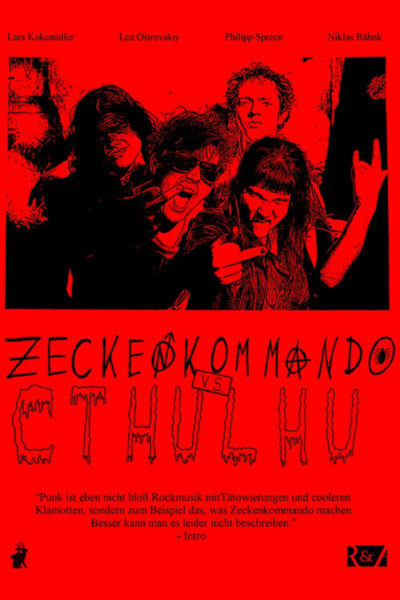 Again, by “what to expect”, I was unsurprised when the first half passed without the slightest mention of any Lovecraftian eldritch horrors. You’re basically hanging out with Kalle (Henriks), Xena (Ostrovskiy), Flash (Bähnk) and Titus (Spreen), in their everyday, entirely work-free lives. [Germany must have really good unemployment benefits…] Considering how little actually happens in this phase, it’s still amusing enough, basically an extended phase of character building, that bonds you to the band. I think this may be Henriks’s best talent as a filmmaker: creating people with whom you want to spend time. It was also fun to spot returning actors, such as Elena Meißner from Cordelia’s Kinder, who shows up as the band’s landlady.

The director has compared this to a Scooby-Doo adventure, and I can see the similarities. It must be said, the villains here are more than a bit crap, and hardly represent the world shattering peril you would expect. Even when they summon Cthulhu, it’s a largely underwhelming eldritch horror we see, lurking in the shadows. “I thought it’d be bigger,” mutters a cult member. This kind of self-awareness helps counter the budgetary constraints. See also the way the band sends out a call to arms against the cult on social media… ending with an exhortation to like, share and subscribe. Or the way they can’t stop laughing at the cultist with a lisp.

This reminded me a bit of a New Zealand movie, made the same year: Deathgasm, with punk here replacing heavy metal. That’s especially true at the end, where music – in the form of a “Cthulhu lullaby” – proves a way for Zeckenkommando potentially to send the deity back to its torpor. If only their guitarist could master that tricky H minor chord, and if internal romantic tensions within the group (such as Kalle wanting to make a sex-tape with Xena) don’t tear the friends apart. Such are the perils of life as a wannabe rock star. Well, and potentially becoming part of a world enslaved to a malevolent god.