Brennan seems to have been a bit of a one-man film industry in Britain. This is the first work of his I’ve seen and while it’s mostly underwhelming, there’s just about enough here to leave me not completely devoid of interest in further movies. It definitely has an interesting idea, basically combining two entries from Neil Marshall’s filmography: Centurion and Dog Soldiers. Hence, you have a small group of Roman soldiers, tramping through the Scottish woods north of Hadrian’s Wall, searching for a previous group which vanished without trace. As well as hostility from the locals, they find themselves under attack from unknown creatures. Creatures that leave tracks like wolves. At least, if wolves walked on two legs.

The problem with taking inspiration from such a well-respected cult classic is, as ever, your production is almost guaranteed to suffer in the comparison, and that’s the case in spades here. On its own terms, considering the micro-budget, this might be okay fodder for a Saturday night viewing, if you are in a fairly forgiving mood. Though even there, this is far too talky, with a quick battle against a small group of Picts, virtually all it has to offer in the way of action for the first hour. The monsters are barely glimpsed and when you eventually do get a good look, you’ll understand why, because it’s clear the budget was instead spent on a budget pack of legionnaire costumes from Party City. 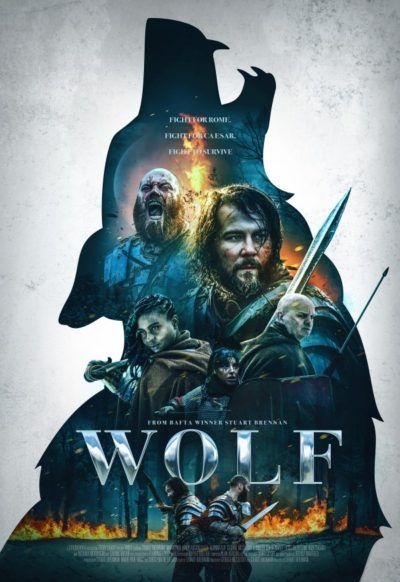 I tagged this in the “fantasy” genre, less for the presence of werewolves, and more because it includes a black, female Roman soldier. Even as a fan of action heroines, this was close to top-shelf cringe, though some of the other women’s roles did at least make some effort at a historical justification, e.g. Germanic scout Ima (Morrison). Amusingly, they seem to do a better job of surviving than more of the hardened Roman men. The rest of the cast are fairly generic, with McCluskey making the best impression as the group’s leader. Domitius. Writer/director/star Brennan likely wears one hat too many. He has done a good job of writing a script that needs only a small cast and one (1) set, the hardly taxing one of a blind man’s hut.

It makes decent use of the Scottish landscape, especially on the rare forays outside of fairly generic forests. The scattering of snow in some scenes helps emphasize the isolation nicely: kudos to one actress in particular for a scene which must have come close to literally freezing her tits off. Although if there’s one unnecessary drone shot, there’s a hundred of them. I suspect Brennan had the use of that piece of equipment for a limited time, and certainly got his money’s worth. I don’t know what the actual budget was: the highest praise I can give, is that for the majority of the time, this wasn’t noticeable. It just needs more happening. A lot more happening.