This feels like it could very easily be an episode of Black Mirror, and one of the better ones at that. It takes place in a future where the terminally ill can commission healthy clones, which will learn about them over the remaining time, then take their place when they die. This is where Sarah (Gillan) finds herself – except with an double-edged twist. Her fatal diagnosis proves to be within the “2% margin of error”, and she’s not going to die after all. Hooray! Except there’s now a clone to be dealt with, who has done a very good job of replacing her, to the point where her boyfriend, Peter (Koale) prefers the replacement.

Sarah’s Double is not going to go quietly, either. There can, as they say, be only one, which means a duel to the death – broadcast on live TV, naturally – between Sarah and her clone, to decide which of them has the right to her life. To prepare, Sarah gets combat training from the somewhat eccentric Trent (Paul). Yet as the lethal face-off approaches, she begins to have doubts about the whole idea, and wonders whether there might be a way for her and her Double to reach a “live and let live” solution. The question is, does Sarah v2.0, now happily ensconced with Peter, feel the same way? Or would she rather still take over the full helping, and condemn Sarah v1.0 to the death she recently avoided. 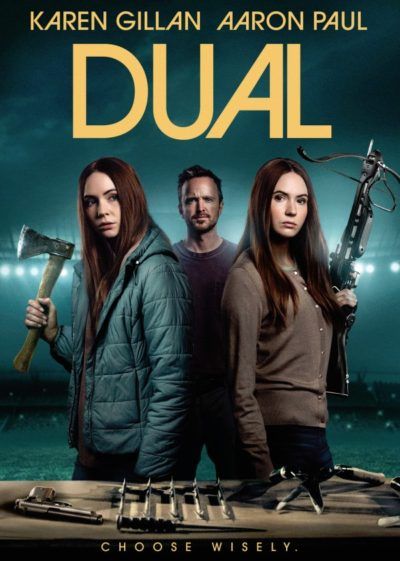 This is all super dead-pan, best illustrated by the physician (Hyde) who breaks news of the terminal diagnosis to Sarah: “You’re taking this quite well, might I add. Most people cry when doctors give them bad news. Which is why most doctors are depressed.” Or there’s the 5% discount offered by the cloning company, because an issue with the Double results in her having the wrong colour of eyes. If you don’t laugh at that – or, at least, can’t see the dark humour in it – then this is not likely to be your cup of tea. I did, and could also relate to the thought-provoking questions it asks, about exactly what it means to be “you”. Is it your DNA? Your experiences? Your taste in food?

It’s a nice performance by Gillan, differentiating the two versions of herself in ways both large and small. Your sympathies shift, especially in regard to the Double. Initially, you feel for her situation, yet her cuckoo-like behaviour, replacing the original Sarah across the board, has her seeming a sinister doppelganger. Then… there’s more. Let’s just leave it at that, since the film has twists to offer, before a conclusion that does feel it left a little too much on the table. I also enjoyed Paul, a quirky turn that is unexpectedly relatable. It’s Stearns’s script though, which feels the strongest suit. He extracts every ounce of absurdity from the situation, and yet, it still feels we’re one technological breakthrough from this all potentially coming to pass.