Well, this Tollywood movie is certainly… something. Is it, by normal standards, a “good” one? Probably not. It has too many flaws, with plot holes you could drive a battleship through. Sideways. In terms of historical accuracy, this makes Braveheart look like a doctoral thesis, and it’s full of ludicrous concepts, like the Quiver of Infinite Arrows. The running time is over three hours and, yes, they break into song – most implausibly, when the hero is being flogged mercilessly with a barbed whip (can’t help feeling this should have been a Telugu version of Always Look on the Bright Side of Life). It’s basically what you’d expect from a film whose title stands for “Rise, Roar, Revolt.” Yet I cannot deny, it is entertaining, sometimes incredibly so.

Things unfold in 1920’s India, where the vicious British regime under Governor Buxton (Stevenson) is cruelly subjugating the locals. After a young rural girl is abducted and taken to Buxton’s “court”, Komaram Bheem (Rao) heads to Delhi to get her back. There, he becomes close friends with Raju (Charam)… albeit just not close enough to bother asking what Raju does for a living, apparently. If he had, Bheem would have learned his pal is a copper for the British, and has been tasked with bringing Bheem in. Awkward. Needless to say, it turns out that Raju is not the traitor to his country it seems, and the pair eventually end up fighting side-by-side against the colonists. 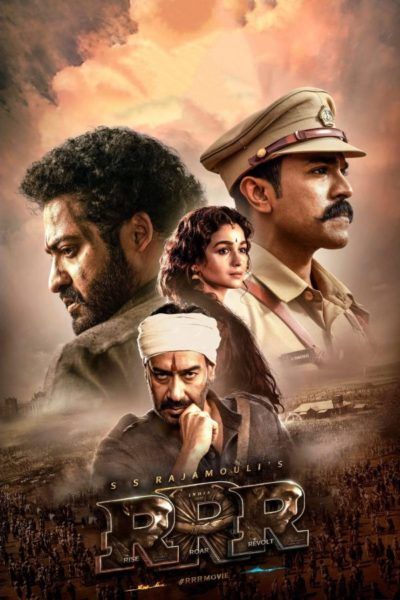 In percentage terms, the action quota may be bit lower than the trailer makes it seem, a side-effect of the 185-minute running time. After the two leads are introduced, there’s then a good hour with only one set-piece of note. This is where Bheen and Raju meet, in the heroic (and in utter defiance of the laws of physics) rescue of a child. We learn here the Indian flag is apparently made of asbestos, and it kicks off the bromance portion of proceedings, which is either utterly macho or completely gay: possibly both. You’re 85 minutes in, before we reach peak RRR-sanity, with Bheen launching a rescue attempt on Buxton’s compound, his diversion being an entire menagerie of CGI animals. I’ve never seen anything like it, and I mean this in ways both jaw-droppingly good, and what the hell did I just witness?

Though I should also mention the mass dance-off at the Governor’s mansion, to which Bheen is invited, after befriending Jenny (Morris), the only non-psychopathic British person in the whole damn film. Even by the high standards of Indian cinema, this is berserk, and perhaps deserves to be considered as an action sequence in its own right. I did turn to Chris during it, and we mused as to whether Scott Adkins could dance. But it is the compound assault where the film properly kicks off, with first Bheen and then Raju ending up in British custody, and having to be broken out of captivity by the other. The relative ease with which this is accomplished leaves me wondering how we ever created an empire on which the sun never set.

It’s after the second such escape that we get the other staggering set-piece, which pushed my I’mSoSure-ometer off the scale. It sees Bheen and Raju holed up in the forest, under siege from ever increasing waves of Buxton’s men. They can fend off the massed forces of the British Raj, with not much more than a bow and a stick. Admittedly, quite a large stick, it has to be said. Oh, there is in addition the use of of a motorcycle, first as a hand-held weapon, and then a projectile (below), capable of being launched all the way back to Buxton’s mansion, where it hits, with unerring accuracy, the Storage Room of Infinite Explosives. Memo to self: if I ever become an evil, colonial overlord, I will not locate an F-sized ammo dump directly behind the terrace from which I oversee the activities of my subordinates. Nor, on capturing my nemesis, will I slog out to the middle of nowhere in order to hang them. Despite frequent statements to the contrary here, bullets really are not that expensive. 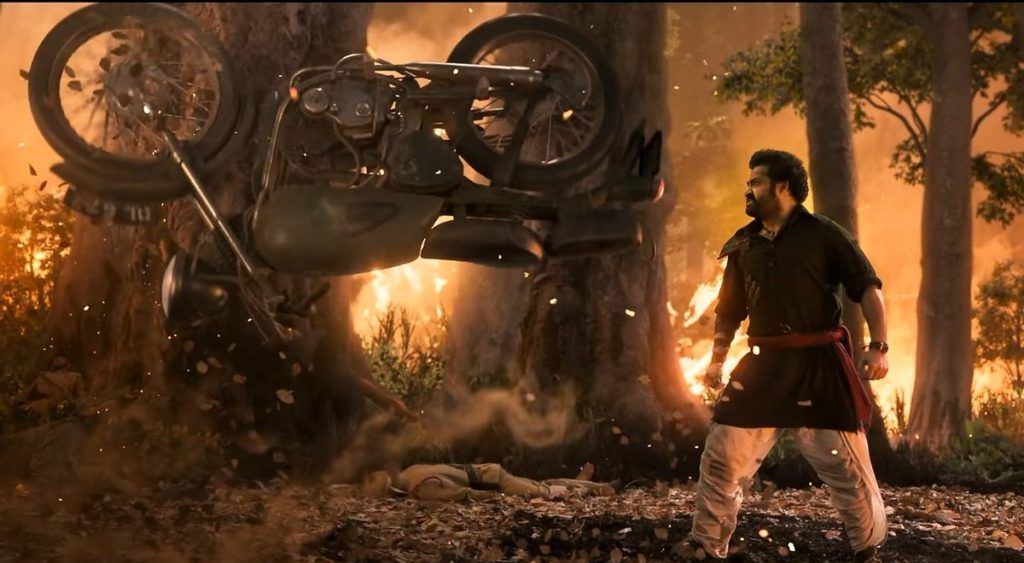 There’s a great two-hour movie here. Perhaps they could excise the entire Jenny subplot, since it serves very little purpose, expect to fulfill the apparent requirement for every Indian hero to have a romantic interest. Just find another excuse for the dance-off, since it would be a damn shame to lose that. However, in a world where it seems even a Hellraiser film has to run over 120 minutes, this no longer seems excessively long. While upper-tier without a shadow of a doubt, I don’t think it quite becomes my all-time favourite South Asian film: I prefer a rather less loose approach to things like plot, not to mention gravity. Still, I’m certainly going to check out Rajamouli’s previous epic, Bãhubali and its sequel, which by most accounts exhibit the same degree of lunatic, unfettered imagination.

With a $72 million budget, it is the most expensive Indian film ever made. I was surprised it was that much, considering the average salary in India is about $420. That’s per month, less than 1/10 of the US figure, so I feel that $72m should go far further. If it looks pretty good, the CGI isn’t quite as top-tier as the preceding numbers imply. Maybe Ray Stevenson cashed in or something. Finally, I was also amused by the opening disclaimer: “The Producer, The Director or the technicians of the movie have no Intention Whatsoever of Hurting Anyone’s Sentiments or Disrespecting any traditions or maligning the beliefs of Any Individual or group.” They need to have added ‘…except the British. They can fuck right off’. For, ten minutes into this, I was ready to burn Buckingham Palace to the ground. I now feel too guilty about our child-abducting ways to visit our local curry house, and will be sticking to delivery going forward.