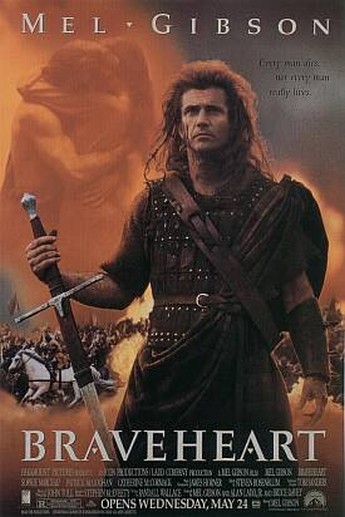 Back before Mel Gibson was Hollywood’s best-known Mean Drunk (TM), there was a time when he was better known for his skill as an actor or director, rather than drunken, anti-Semitic ravings. Yes, I know it seems difficult to believe currently, and you could now read this film in an entire different way. For example, is it just me, or does chief villain, King Edward (McGoohan), look a bit…Jewish…? Indeed, the final reel, where Wallace (Gibson) is being tortured, also seems a dry-run for Passion of the Christ. That aside, this remains a wonderful, mythic saga for anyone with a drop of Scottish blood in their veins; and for someone with considerably more than that, like me, the urge to storm the nearest English pub and burn it to the ground is almost overpowering.

Generally, I’m unimpressed by movies based on historical figures, but given little is known for sure about Wallace, the makers have leeway – much here could be true, though the chronology is often altered. For example, while both the death of his father at English hands and the mass hanging of Scottish lords by Edward may have taken place, both were when William was an adult. On the other hand, the romance with Princess Isabelle (Marceau) is utterly fake – she was, in reality, aged nine and living in France at the time of Wallace’s execution. However, all these changes make for a much more effective, dramatic film.

At 170 minutes, it could be accused of rambling, and some scenes seem redundant, especially set beside the ones which work really well, such as the Battle of Stirling or the finale. But Gibson’s conversion from pacifist farmer to vengeful rebel is handled superbly, while McGoohan is excellently evil, and Sophie Marceau does a lot with a small part. Love, honour, patriotism; the movie touches all the emotional buttons with great deftness and epic grandeur. In my original review, I wrote, “there won’t be a dry eye in the house at the end – providing said house is somewhere North of Berwick.” Or, it must now be admitted, even West of Tombstone.