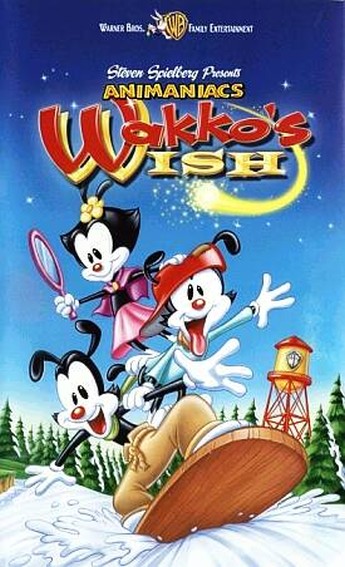 This Animaniacs spin-off is inconsistently funny compared to, say, How I Spent My Vacation, but there’s enough hits to roll cheerfully along. It reminds me of pantomime more than almost anything else: set in a fairytale land where puns and songs abound. All it needed was some audience participation, but somehow, yelling “He’s behind you!” at the TV set didn’t quite feel the same… Wakko gets a wish as a result of picking the right falling star, but to redeem it, must go to where the star landed. Unfortunately, word gets out and since whoever arrives first, gets the wish, everyone else in town [the other Animaniacs characters, such as Pinky and the Brain, along with the evil king and his minions] head off there too.

Like all cartoons, it’s best at its most subversive: the profit-driven invasion of “Warnerstock” by “Ticktockia” is a barely hidden nod to the Time-Warner merger. More of this would have been welcome, especially replacing some of the duller musical numbers – though the take on Liszt’s Hungarian Rhapsody #2 is fabulous, up there with Tom and Jerry classic, The Cat Concerto. This is also a bit heavy on the pathos, rather than anvils dropping on heads, but is handled well, rarely becoming grating and is sometimes surprisingly effective. If not quite up to the level of the best episodes, it is a decent stab at stretching the format to feature-length, and a fitting sendoff for the characters. Somewhat sad to realise, there’s nothing quite like Animaniacs around these days.