Yeah, this was disappointing, in a number of ways. Firstly, it’s 121 minutes long, which is far too long for the material it contains. The first 80 minutes are particularly underwhelming, before it does at least somewhat redeem itself. The heroine is Riley (A’zion), a somewhat recovering addict who lives with her brother, and hangs out with her sketchy boyfriend, Trevor (Starkey). In need of cash, she goes along when he suggests breaking into a storage facility, and it’s there she encounters a certain shiny puzzle-box. Playing with it leads to her brother vanishing, and the eventual discovery it belonged to industrialist Voight (Visnjic), who vanished mysteriously six years previously.

Riley, Trevor and their housemates head to his mansion, where they discover the box has various configurations, each of which require a sacrifice; completing them all grants a wish. The film then becomes a slasher pic for a bit, with these highly annoying millennials being hunted round the estate and picked off, while trying to turn the tables on the Cenobites. Voight might not be as vanished as he seemed, and nor might everyone in Riley’s circle necessarily be on the same page. Though if we have learned anything from the ten previous movies in the franchise, it’s that bargaining with Pinhead – here called “The Priest” (Clayton) – and pals is definitely a situation where you need to keep the receipts. 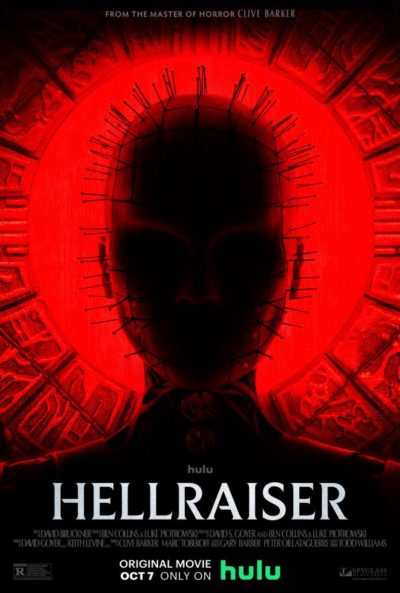 Y’know, I could not care less whether Clayton identifies as male, female or a Cenobite. I just wish they identified as someone with a personality – because going by their delivery of the iconic line with which I started this review, they don’t. Put beside Doug Bradley’s imperious statement – you knew he meant it – Clayton appears to be reading the weather. “We have such sights to show you. Later, scattered showers.” The Priest, and all the others, look the part, no question, though I do miss the grungy, suburban attic feel of the original. They just don’t project anything like the same air of menace. Hell, one of them even runs, surely reason to get your membership of the Cenobite Guild permanently revoked for an unconscionable lack of gravitas.

Admittedly, compared to the dreck which passed for most of the latter sequels especially, this final section at least feels above average and has its moments. What you have to go through to get there: not so much. Both Chris and I were irrationally annoyed by the lead actress: Chris by her mouth (“What is up with her lipstick?”); me by the affectation of the apostrophe in her stage surname. Hey, I said “irrationally”. I mean, while Ashley Laurence wasn’t great in the original couple of films, the presence of Clare Higgins and Kenneth Cranham more than made up for it. Five minutes in the company of Riley and her pals, and you’ll be the one muttering “Jesus wept” under your breath, and pledging for #TeamCenobite.