“In Russia, Blair Witch project you!” That seems to be the lesson here, which starts off in decent form, before degenerating into an all-too familiar format, involving running around woods in near darkness, while sniffling loudly. The set-up involves a remote forest area, where people have a habit of disappearing, only to be found dead or catatonic, stripped of their clothes. We get interviews with local citizens, telling off a menacing presence in the woods, which they blame on local figure of folklore, the Lame Widow. The title, unsurprisingly, drops the first part of her name – “lame” is not exactly something any horror movie would advertise. 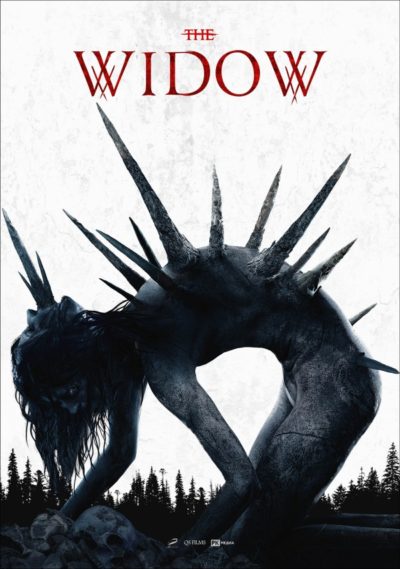 Then it’s off into the trees with a rescue group, whose job it is to track down missing persons in the area. They are on a training mission for new recruit Victoria (Potemina), which is being covered for a story by local TV reporter Kristina (Gribova). She gets an unexpected scoop when the team are ordered off their training, to search for a local kid who has vanished after going into the woods with his sibling. As darkness falls, they haven’t found the missing child. But they do find a woman, Zoya (Bychkova) naked and near death. That’s when things start to kick off, as the forest goes all Evil Dead on them, and refuses to let them leave. Their truck breaks down, the road out is blocked, and their equipment malfunctions. Zoya – now feeling much better, thank you for asking – starts telling them they won’t get out. At least, not alive.

To this point, it hasn’t been bad. It doesn’t stick exclusively to the “found footage” aspect, and what there is, is shot competently enough not to be a distraction. It’s a creepy environment, effectively used, and doesn’t overplay its hand. The problems arise as things increasingly kick off; I wonder why it needed five credited scriptwriters, because surely it only took one person to watch The Blair Witch Project. Deserted, ramshackle cabin, deep in the woods? Check. Party member standing in the corner, refusing to turn around? Check. They even find the missing kid’s iPhone, which has on it footage that might well be Blair Witch out-takes, in all their shakiCam glory.

Despite the strict instructions never to go off on their own, off on their own they go, and we get extended sequences of various elements of the party creeping slowly through the woods, yelling each other’s names. It does actually deliver more of a pay-off, eventually, than Blair ever did, with there obviously being something genuinely present in the woods. Though it doesn’t not appear to be anything even close to the rather spectacular image on the poster. Logic and explanation are something you should not expect to find in the finale, which is fair enough, considering the nightmare world for which the makers are clearly aiming. Probably best not expect too much of anything, actually.