Between this and Take Me Home, if there’s anything we’ve learned from this month, it’s that if a house in Asia is being sold cheaply, and its previous occupants won’t return your phone calls… I’d recommend seeking alternative accommodation. Because it’s likely already the home for some kind or other of spooky, troublesome tenants. In this case, the unlucky new home-owners are married couple Cynthia (Cabral) and Daniel (Bascon), who have moved from Manila to the mountain town of Baguio, taking possession of a veritable mansion. They got this for a song, with the last owners now off in America. Cynthia is expecting their first child, and Daniel works as an engineer for a mining company. 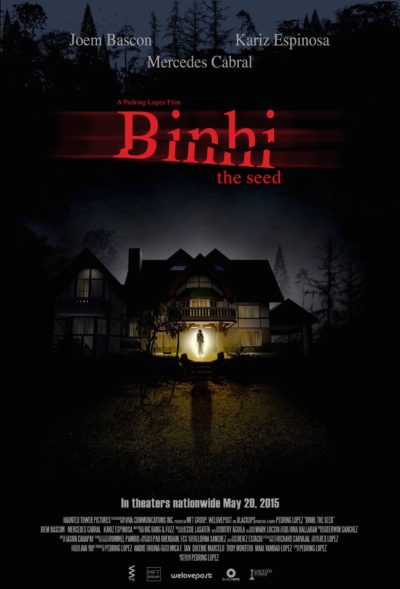 It’s not long before the weird shit starts to happen, as expected. This is mostly in the forms of child-like activity (the film is subtitled ‘The Seed’), like laughter when there’s no-one but Cynthia in the house. Oddly though, it doesn’t seem particularly confined to the home, especially with regard to Daniel. He sees a Creepy Asian Ghost GirlTM while on the job, and can’t even shop at a convenience store without experiencing paranormal activity. This freaks him out – but then, he also has a dark secret lurking in his past, which you know is going to end up being of significance. Cynthia isn’t actually too freaked out, saying the spectral presence makes her feel comfortable, which does at least make them staying somewhat plausible. Her husband? Not so much, and he consults a local wizard, a mangkukulam, to find out what’s going on.

I will say, the final five to ten minutes are quite brilliant, with Daniel trying desperately to rush home to Cynthia after his “seance”, only for fate to conspire relentlessly against him. It offers a triple-whammy of twists which I did not see coming, and does a very good job of disorienting expectations. Just a shame this only showed up after 80 minutes of pedestrian haunting. Seriously, it feels as if writer-director Lopez has never seen any other haunted house film, and believes the audience hasn’t seen them either. The cinematography is quite slick, Pao Orendain’s camera gliding around the house in an effective manner, and Lopez’s background in pop videos and commercials is apparent in the technical expertise on view.

This, however, doesn’t translate to the connection to the viewer’s lizard brain, which is necessary for a successful horror movie. Before the previously discussed finale, there’s almost nothing here which is remotely scary or shocking, because we’ve seen it all before. You can predict most of the scares before they show up, the soundtrack telegraphing them with the subtlety of a flashing neon sign. There is no apparent rhyme or logic to the ghost either: it’s never clear what, for example, unfinished business she is attempting to conclude. Though maybe that’s a cultural thing, with Filipino spirits not required to have that motivation. Motivation for any prospective audience is equally hard to determine.