While this mostly seemed like your standard zombie film (Deadhorse.gif), I was intrigued by this section of the synopsis. “After each attack the infected seem to fall into a 32-second trance of calmness and stillness before charging again.” Hence the title, obviously. Well, I’m here to tell you, there’s only one scene where this cooling-off period is of real significance. The rest? Well, a more appropriate title would be “Virus Stumbling About a Rundown Fitness Centre In Near Darkness”. Not quite so catchy, is it? The sad reality is that, for the most part, it is exactly the standard zombie film it seemed. However, yay, I get to cross Uruguay off the list. Felt I had done so already: turns out that was Venezuela. 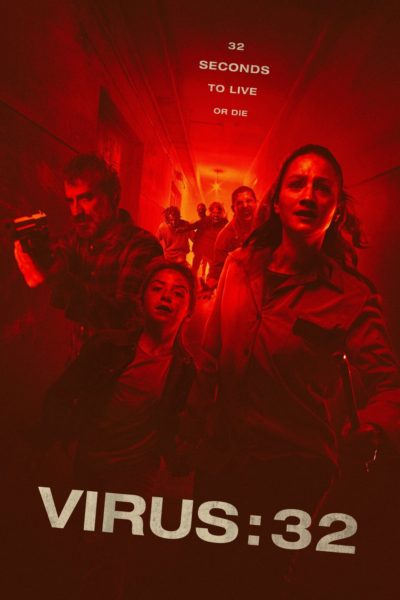 The heroine is Iris (Silva), a security guard at said facility, who is estranged from her husband (Rilla) and daughter, Tata (Garcia). The latter is dumped on her, turning it into Take Your Daughter to Work Day. This coincides with a rapidly spreading outbreak of violence, and though the centre is initially fairly secure, it eventually poses a threat to mother and daughter, who become separated. Also inside is Luis (Hendler); he had been on the way to hospital with his heavily pregnant wife, when they were forced to take sanctuary. He knows where Tata is, and requires Iris to help his wife give birth in exchange for the information. Of course, anyone who has seen the Dawn of the Dead remake knows that pregnancy in the zombie apocalypse is unlikely to end well…

Indeed, DotD feels like it is also an influence in the end-game being a boat Luis says they can use to escape. For, as we find out, these zombies seem to be incapable of swimming. Though much like the 32 second thing, this appears to be forgotten almost as soon as it has been introduced. A pity, for I had visions of the heroes luring a slew of zeds to plunge, lemming-like, into the centre’s swimming pool to a watery grave. The movie seems more interested in ploughing the usual furrows of the genre, in a largely pedestrian manner, than developing concepts like this, ideas that have genuine potential to be interesting.

Which is why we get almost interminable sequences of Iris roaming the corridors in search of Tata, or fleeing from the intruders. It’s clear there is a lot going on in the outside world too: there’s a particularly well-done drone shot near the beginning to illustrate this. Once the building goes into lockdown, it feels as if the makers’ creativity is locked down alongside it. This is almost more frustrating than a more rote, by the numbers production, since there are enough scenes here to indicate skill and imagination are both present and available. Quite why they don’t exercise it – instead choosing to coast for much of the movie, content to recycle leftovers from preceding zombie movies – is a disappointing mystery.