Purely by coincidence, we watched this the evening after we came back down from Prescott, in the area of Northern Arizona where the events of the film unfolded. Though, outside of a few shots on Prescott’s historic Whiskey Row (an area where Wyatt Earp and his crew also used to frequent), this was largely made with New Mexico taking the place of Arizona, for tax reasons. It is one of our state’s largest recent tragedies: in 2013, the Granite Mountain Hotshots, an elite firefighting team, were almost wiped out when a wildfire they were battling engulfed them unexpectedly. All but one of the 20-man team were killed, the greatest loss of life in the service since 9/11. 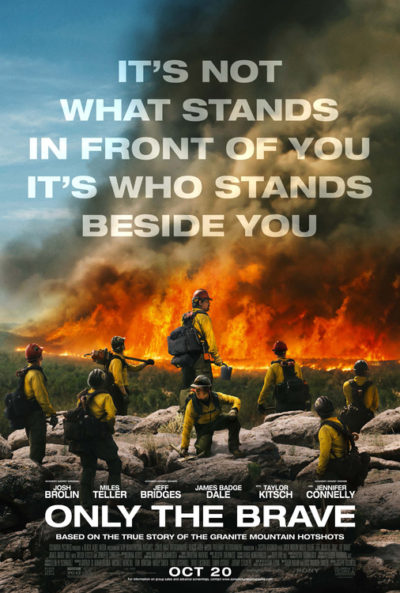 Most viewers will know these facts going in. It feels as if the movie is trying especially hard to overcome a sense of inevitability, by pumping up the drama. So there’s grizzled chief Eric Marsh (Brolin) and his fight to get his team coveted Hotshot status, while dealing with his long-suffering wife, Amanda (Connelly), who resents her husband’s devotion to his job. Or Brendan McDonough (Teller), a junkie who vows to clean up his act after the birth of his daughter, and for whom the Hotshots represent a way out. It may be accurate enough – McDonough did have a drug problem as a youth – yet feels not much more than rote, trying to make us care about people we know are almost all doomed, from the start.

The movie only really catches alight when it… well, catches alight. Kosinski has a great eye for the spectacle, and right from the beginning, the scenes with fire are so convincing, you feel you should be toasting marshmallows. It offers a nearly seamless meshing of practical effects and CGI, in a way that’s close to being as effective as the technical standard bearer in such things, Backdraft. The scenes where they battle the flames across treacherous, mountainous terrain bring considerably more heat than the emotional conflict. I feel this is at least more credible than some criticism of the movie, e.g. the New Yorker writer who complained it was missing “the possibility that there might be anyone besides white people in Prescott.” Two minutes of research would have shown him the town is 93% white – difficult though it may be for the coastal elite to grasp such a place could still exist.

At 134 minutes, the film is likely overlong, especially since you know where it’s going. Nor is there any real sense of heroism, since the Hotshots didn’t sacrifice themselves to save lives, or anything more significant than a few homes. On the other hand, prior knowledge adds a definite sense of foreboding, and you can do nothing to stop Marsh leading his men to their doom. The acting is generally solid: this keeps the movie from burning out completely, and leaves me feeling at least slightly guilty about tagging it in the “disaster porn” category. Just not guilty enough to stop me from doing it.