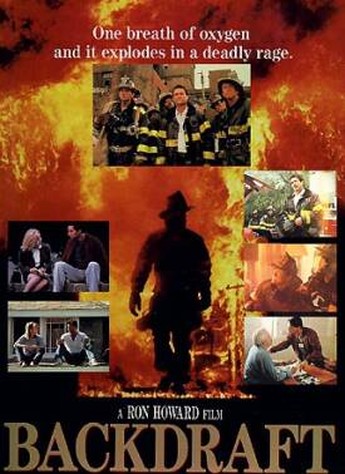 After fifty minutes of this, I’d had enough of the uber-macho brotherly shit between Russell and Baldwin, the former a veteran Chicago fireman, the other a rookie. Enough male-bonding, enough stale heroism, and certainly enough irritating and cliched orchestral soundtrack. But stick with it, and you’ll find a good movie buried in there.

It struggles to the surface when Baldwin teams up with investigator De Niro, tracking a serial killer who uses explosive fire as his weapon. This is far more interesting, though I could have done without the sub-Silence of the Lambs scene against convicted arsonist Sutherland, which made even me pine for a Jodie Foster. Jennifer Jason Leigh and Rebecca de Mornay lose their bras and take care of the children respectively, for this is a man’s world, not for the likes of them. Anyone who has been to Universal Studios will know where it’s all going to end up – in more valour, swelling orchestras, and flames. Unfortunately, on your TV, the impact of the last-named at least is reduced to a level slightly greater than a lava lamp.