This starts and finishes very solidly, but sags badly in the middle, offering us nothing we haven’t seen too often before from the zombie field. The trigger for the apocalypse here is a drug user who take desomorphine – the same drug which kicked things off in Escaping the Dead., earlier this month. Except here, the junkie is also infected with rabies, and it’s the cross-fertilization which is the problem. These critters aren’t hanging around, either. They’re such high-velocity zombies, they might as well be sponsored by Adidas. While the trouble starts in the city, the main protagonist is Dr. Adam Vargas (Guevara), a country doctor who recently lost his wife to cancer. Unfortunately, he just shipped his son Miguelito (De Lima) off to the grandparents. So when the apocalypse reaches his small town, he sets out on a perilous journey with his pal, Johnny (Urbina), to collect Miguelito. His previous work as a molecular researcher also has him answering a call to join a research group, desperately seeking a cure. 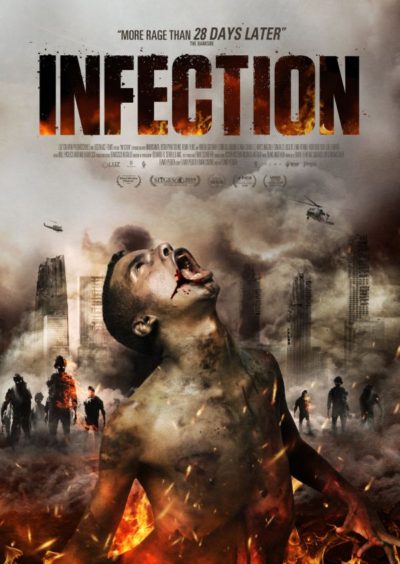 Which is where things get a bit dull, to be honest. The concept of a person making their way across a zombie-infested landscape to reunite with/rescue their family is such old hat these days, it could be worn by a pharaoh. Lots of running about, bolting of doors and whacking hungry infected people upside the head with blunt objects. Even if the Venezuelan countryside is quite scenic, that is not enough to get past the very strong feeling we’ve seen all of this before. You can almost tick off the zombie cliches as they appear, such as someone who is bitten, but waves it off as nothing. The humans who pose as much a threat as the infected. The army officer who goes power crazy. There are way too many elements here which passed their cinematic sell-by date about a decade ago.

However, there is an aspect which does stop it from collapsing entirely. It’s the way the film acts as a metaphor for the collapse of Venezuelan society and its economy, under Presidents Chávez and Maduro. This is driven home during an end-credit sequence depicting the aftermath, with Venezuelan refugees flooding into other countries, and being treated with suspicion or worse. It’s a thread which runs throughout the film, such as Vargas making his way through a corpse-littered street, over which a billboard touts the revolution (top). From what I’ve read of the situation there, the makers probably didn’t need much set dressing to make the country look like a desolate wasteland. Interesting to see a horror movie with social criticism which isn’t of a liberal bent, basically posing the question “Socialism or zombies: which is worse?” Just a shame it wasn’t able to maintain this approach on a consistent basis, reverting to generic horror tropes instead of creating something potentially new for this well-trodden genre.