This is clearly a labour of love, apparently shot over a five-year period in and around Copenhagen – mostly in the very early morning, going by the deserted streets. You have to respect such passion and commitment: I mean, I have trouble getting through an eight-episode series on Netflix. Given this, you have to cut it some slack for the rough edges that are occasionally obvious. It does at least try to put a new spin on the played-out zombie genre; in their defense, it was probably also fresh and new when they started filming… Rather than the usual infectious disease, the trigger here is bad drugs – this was inspired by the Miami cannibal attack of 2012. [Though while the media reported this as the result of using “bath salts”, toxicology found only weed in the attacker’s system] 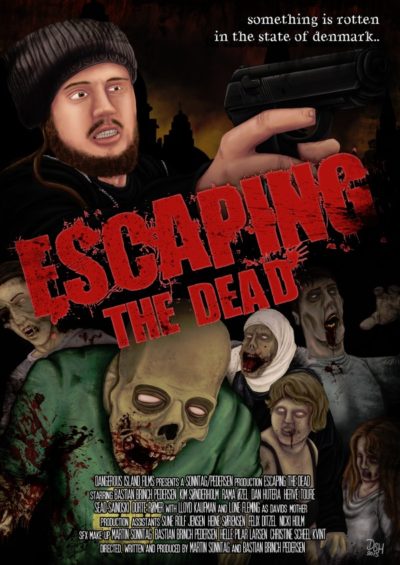 The hero is David (Pedersen), a hippie and small-time drug dealer. Actually, the zombie apocalypse turns out to be a welcome distraction from his other problems, such as him being in debt to some rather less peace ‘n’ love types. After a rough night of partying, he’s staggering home when he finds himself being menaced by consumers of the bad batch. He has, first and foremost, to try and survive the immediate threat, while figuring out a longer-term plan. In an ironic twist, he ends up teaming with a police officer, Lars (Sønderholm), and making their way out of Copenhagen to the relative sanctuary of an outlying farm.

It’s actually the middle chunk where this is at its most memorable. The film certainly takes its time to get going, with the first 25 minutes being stuff like David and his pal’s amateur robbery attempt. Though nice to see veteran actress Lone Fleming, who was in 1972’s Tombs of the Blind Dead, playing his mum. [Lloyd Kaufman also gets a cameo – he must have been on holiday in Denmark] This central third of the film is almost dialogue-free: it’s just David trying to survive in an otherwise eerily depopulated city, using whatever he can find to hand, and is effective in its simplicity. You get some quite impressive practical effects, which make up for in their energy what they may somewhat lack in slickness.

The problems are more whenever the bloody carnage comes to a halt, as you are then left to look at the performances and script, which are… Well, let’s say “not exactly the film’s strongest suit,” and more or less leave it at that. Enthusiasm and inventiveness are not as able to cover the shortcomings there, or the fact the film is going down a path which has been so well-trodden as to leave a groove. Nothing much ends up being made of the pharmaceutical origins, and the film eventually ends up just petering out, with our heroes driving off into the sunset on a tractor. Even at 78 minutes, it feels a tad stretched, though I do admit, still has its moments.