Somewhat irascible model Zina (Ivanisin) is out on a photoshoot in the mountains with colleague Mia (Rozman), as well as a photographer and a make-up artist. There’s an early rough encounter at a roadside produce stand, but the problems really start when the four are abducted by a pair of locals. The… – what’s the Slovenian word for “rednecks”? – brew their own moonshine, which has a cult following in the city. The secret ingredient in it is human blood, and they intend to use their abductees as source material for their next batch. Zina needs to escape from the cellar where she is held, and make her way through the mountainous landscape to safety, before becoming a bottle of home-brew schnapps. 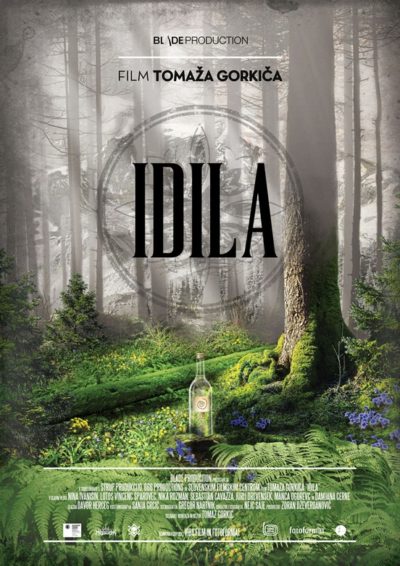 It does take a little bit to get there. Initially, there’s a bar scene which seems unnecessary; it’s only later you realize they’re all drinking the questionable hooch. It also establishes Zina’s creds, as somebody who takes no shit. The next morning, it’s the journey to the location, with the obviously hungover heroine increasingly irritated by her colleagues. Normally, we would be annoyed by this dilly-dallying, yet here, it’s entertaining enough in its own right. Ivanisin has the same hair and a few of the same expressions as a young Tura Satana, and it’s fun to watch her grinding the ditzy Mia’s gears (Rozman has some fun expressions of her own). The lovely Slovenian scenery is also a plus. However, when things go wrong, they go wrong very quickly, for all the city folk.

The pair of deformed brothers (top), Francl (Sparovec) and Vintlr (Drevensek) are clearly trouble. That’s apparent from the second they come into sight, strolling across the mountain meadow like a pair of mutated Julie Andrews (for the US release under the alternate title, the tag-line was, “The hills are alive, with the sound of slaughter”). There’s not much in the way of subtlety about them, and the rest of the film is similarly straightforward. No-one dies easily, the most extended being the fate of one victim who is drained of blood like a stuck pig. My main complaint was an extended escape sequence, which consists of far too much creeping slowly through the house, in almost pitch darkness. You can’t see what’s happening – so it’s probably fortunate that nothing of significance does.

Despite not having much in the way of novelty, the execution is solid, with a couple of genuinely nasty moments. The heroine is more likable than many in the genre, and I was also impressed by the way the finale tied things up, coming back round to where everything started. While the story is familiar, there is a good deal of local colour added, making it seem fresh enough to pass muster. By some reports, this is the first-ever feature length horror movie to come out of the former Yugoslavian province. If that is the case, they certainly hit the ground running.