Opinions were divided on this one. Chris really liked it, particularly the more emotional side, something not commonly seen in a zombie movie. I, on the other hand, found it obvious, painfully dragged-out and infected with a painful “brown saviour” mentality. And guess who’s writing the review? /sharpens knives. Though Chris almost didn’t watch it, convinced when I put it on that we’d seen it before. Turns out, that was the seven-minute short of the same name, made by the same directors in 2013. Watching that again, I’d say it packs a greater emotional wallop than the feature-length version, in roughly 6% of the time. 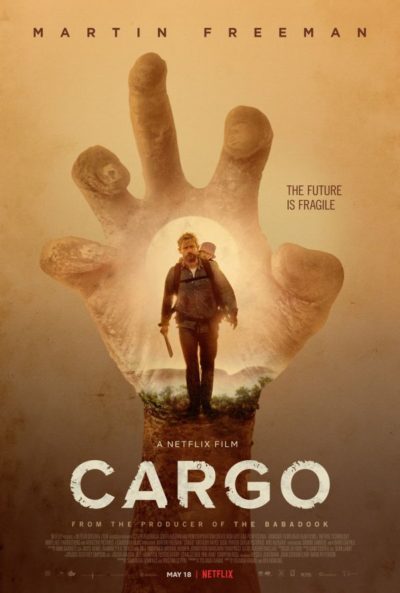 We join the zombie apocalypse here in progress, with Andy Rose (Freeman), his wife Kay (Porter) and their baby daughter Rosie, trying to make their way to safety on a houseboat. With supplies running low, Mr. and Mrs. Poor Decisions [example: who the hell names their daughter Rosie Rose?] end up infected and dead respectively. The film takes 30 minutes or so to cover the events of that one sentence, and that’s the kind of glacial pace you can expect here. With his biological clock ticking, Andy heads off through the outback in search of a safe refuge for Rosie, in the 48 hours before the infection kicks in. He’s helped by Aborigine girl Thoomi (Landers), but also has to deal with less pleasant characters, like Vic (Hayes), who captures people fur use as zombie bait.

The story-line here doesn’t so much develop, as lumber from plot point to plot point, driven in the early going mostly by the married couple’s questionable choices. Thereafter, both the baby and Andy’s infection are largely forgotten: the former is wheeled out on occasion, to look adorable and try to make people care. Or what are you, some heartless bastard? I’m just not sure we ever see Andy… oh, I dunno, feed his off-spring. Similarly, it’s easy to forget he’s terminally infected: there’s preciously little sense of urgency to be found in his actions. Indeed, it’s often easy to forget this is a zombie film, rather than a low-rent version of Mad Max, with Vic acting like an idiotic Immortan Joe knock-off. Just without any physical presence.

Then there’s a bizarre subplot in which, basically, all the Caucasian characters are basically useless. The only one portrayed as competent are the natives, who seems to have shrugged their shoulders, reverted to their pre-colonial lifestyle, and are surviving quite nicely, thank you very much. It’s not exactly subtle, and this is a case where the message seems to overwhelm the movie. By the time the final, inevitable (especially if you’ve seen the short) conclusion arrived, I was hard-pushed to care much. Even the spectacular Australian scenery, shot with a good eye by Geoffrey Simpson, can’t do much to elevate a movie which doesn’t have as many Very Important things to say as it thinks.