To my great surprise, this… did not suck. Yeah, it is a “faith-based” film, one which we would likely have run away from at top speed, had it not been made here in Arizona. [I think Chris recognized about half the cast!] Certainly, it has flaws, not least audio which has plenty of issues, to the point of sometimes being barely audible. However, it does have a couple of things in its favour. It manages to be earnest, yet stops just this side of being over-earnest. For example, the main character quotes verses from the Bible… but tacks on meals to the end, because that’s how he learned the verses. So you get, “A fool is quick to lose his temper, but a wise man keeps it. Chicken pot-pie.” This kind of approach helps defuse the preachiness very much inherent in the genre. It has sincerity at its heart, to be sure, and that helps too. 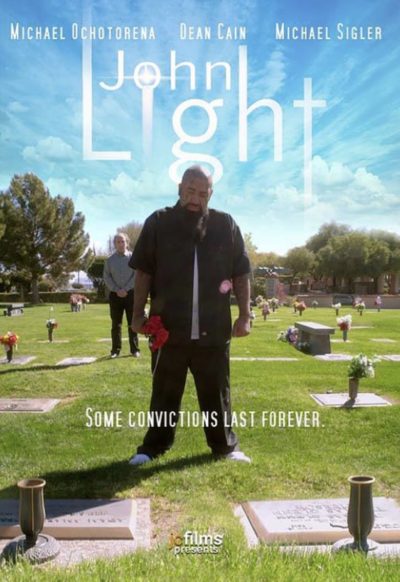 The other big plus is Ochoterena himself, as ex-con John Light, now trying to make his way in the outside world. As you can see above, he’s basically the Arizona version of Danny Trejo, except even Danny didn’t go the face tattoo route. He simply looks genuinely scary, and it’s easy to see why many people in the film react negatively, based purely on that. There’s a good, non-evangelical lesson here about not judging a book by its cover. Ochotorena gives the character depth, such that you certainly find yourself rooting for John, as he tries to walk the straight and narrow path with the help of his mentor, Matt Garrett (Sigler), and overworked probation officer Tom Morgan (Cain, a relatively minor role).

I can’t say there are any surprises here. John has to deal with a co-worker who tries to have him sent back to jail, and temptation to fall back into his old ways, in the shape of the lady from apartment 2B [who might as well pluck an apple from a tree and offer it to John]. But with the strength of his faith, he prevails, because good things happen to people who are good at heart. Yeah, I’m not sure real life quite works like that.  I did like the depiction of the mentor in helping John through the transition; my father has done similar work (though not with ex-cons), and I know how important it can be. Ochotorena apparently is a prison mentor himself in real-life, which is highly laudable.

Less effective were the church scenes, which felt both unconvincing and forced – very much the cliched kind of thing I feared going in. The film did nothing to show why the fellowship that offered was any different from, say, a sports club. Perhaps they presumed that the viewer knew why this was important: taking it on faith, if you like? But, as mentioned, on the whole this didn’t suck as much as feared. Though there’s little doubt I’d rather see Ochotorena starring in an Arizona version of Machete.