It’s time for Chris Pine to star in another low-key, down-beat, blue-collar gritty-reality film.  (Did I-use enough hyphens-there?)  He plays James-Harper (sorry) who has been discharged from the US military for using the drugs necessary to help him survive in his unit, due to having a very bad knee.  When I say discharged, I mean thrown out from his ‘family’, without pension or benefits, and he is now very much alone.  As well as broke.  Fortunately Private Military Companies want him for his renowned skill set.

It’s very low-key and feels horribly believable, with real people put in a corner, looking for a way, anyway, out.  It’s oddly reminiscent of the excellent Hell or High Water – give it a lookm it’s a stunning and brutal film.  Anyway this film is a bit of an inverse The Bourne Identity – which isn’t to damn with faint praise, far from it. 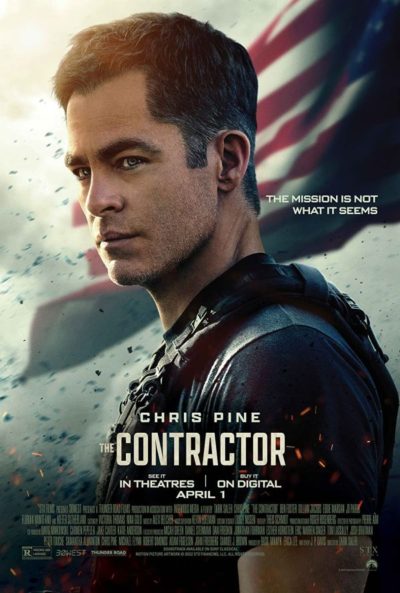 And here we go, Harper is on his very first PMC mission and things (and his boss) have gone very badly FUBAR, and it’s time for him to go freestyling, whilst also trying to get to the bottom of some very dodgy dealings to do with an H1N5 virus that was most definitely not in the mission profile.  Oh, and he’s trying to make it home (and stay) alive.  So, it’s turning out to be a busy day at the office all around.

Pine is compelling, believable, visceral and real.  He really is a very fine actor.  As already noted the whole piece is very Jason-B, with good pacing and also spacing along the way.

It’s an oddly honest film.  Brutal.  But honest.  The action scenes are reasonable and proportionate, as well as believable.  It’s well shot, with minimal mood music (of which I am a very big fan), and is nice, clean, simple, sympathetic and eminently watchable.  It is well done from top to bottom, and once again I’ve managed to avoid mentioning the plot in any meaningful way.

The only reason it’s not a B+ is that I’m writing up my notes a day later and I’m struggling to remember much about the film.  Nonetheless it is a very solid B, and recommended.  But then I like Chris Pine as an actor, and you may not.  Now, get lost will you?  I’ve got two more reviews to write today, and if I don’t get them in in-time Jim will-fire me-again-!  (I-like-hyphens…)