This is a very cute story, very well told where I was left wondering who were the real villains, or indeed if there were any villains at all. Maybe everyone is just playing the cards that have been dealt as best they know how. Both the good and the bad hands.

In this film two (latter day) cowboys set to robbing banks in West Texas, and two Texas Rangers set to catching them. There is more to the plot than just that, it’s just that revealing it will detract from enjoying the film, so let’s just say that all is not quite as it seems.

This is one case in point where it seems easy to quickly know whether or not you are going to enjoy the film overall. A big clue to this one’s vibe is that the music is by Nick Cave and Warren Ellis – bad seeds the pair of them. The other ‘tell’ is the opening scene where the tone is writ large on a wall, viz: “Three tours in Iraq but no bailout for people like us”.

It’s time that’s needed for this film. Both to give and to take. Give the film the space to breathe in to and take the necessary time to allow the relaxed pace to draw you along. Settle back. Don’t rush. Just allow the underlying deep sadness and regret to be told beautifully and brilliantly, all woven up in a complex, clever and very neat film.

The tone is unrelentingly down at heel in look and feel, and superbly supported by some stunning cinematography in Texas. There is very cute interplay within both pairings of ‘tagonists, provided by some great, cute, sharply funny, incisive and touchingly affectionate dialogue. Dialogue that is itself key to the broader story-telling, where saying mere words is not enough, they need to be felt to be properly understood. And here, even when delivered as flat as pancakes, they all hit home. 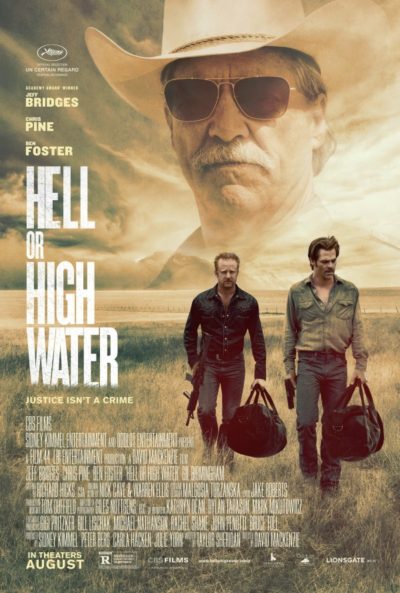 “No-one robs banks any more.”  Except these cowboys have both rhyme and reason.

A slow pace, paced slow. So slow. It’s a long slow burn heading to that which we all know can be the only conclusion. Where an unstoppable force meets an immovable object. The justifiable bitterness is a constant undercurrent from people beaten down, endlessly trampled over by life. This is all beautifully realised, affectionately so, and oddly perhaps holding the same tone as parts of The Hurt Locker.

“Just relax, enjoy the little town.” Bridges could be speaking for the film as along the way so many small tales are told, with little windows held momentarily ajar for us to glimpse what layers lay behind a veneer.

The acting along the way, all of it, is first class. Every player is humbly believable, relatable, human and visceral. Pine and Bridges stand out simply by having the most screen-time and are in reality the two main characters, but, not by so much that the others aren’t equally key to the overall.

The climax is signalled patiently, clearly and cleanly. The violence when it happens is shocking, guttural, horrible, logical, saddening and as inevitable as taxes. Albeit the confrontation with the posse is farcical and hilarious, as well as darkly portentous.

I’d venture that you need to be in the right mood to fully enjoy this film. It is the antithesis of high-octane, shooty, shouty, car-chasey film making – it’s not overtly exciting, instead it is enthralling, beautiful, tiredly sad, engaging and compelling. It’s also neither fast nor furious, and if that is more to your tastes then I strongly suggest to avoid. The film feels longer than its 100 odd minutes but not because it drags, but because everything has all the space and time that’s needed to allow it to feel unrushed. I saw this film in the cinema upon release and was deeply impressed by it, as was my friend and, as best I could judge, so were the rest of the slightly sparse audience. I sent this film to a good friend. He sent it back. He hated it.

And the denouement? It is unclean and unclosed, yet not messy and also deeply satisfying as this journey is complete. So, just give the film the time to evolve and I hope that you will be pleased that you have spent your time with it. And if not.