Any time you have Pat Suzuki dressed as a small ape, I think you’re in trouble.

There are times when a film is so jaw-droppingly ill-conceived, it defies analysis, or anything so prosaic as a rating. Usually, such entities are the product of independent auteurs, working for nothing but their own art. But what makes Skullduggery so unique, is it is a product of a major studio, specifically Universal. Admittedly, it is also a product of the seventies, the decade which gave us some of the most bizarre “mainstream” films ever, e.g. Zardoz. But even allowing for the era, it’s difficult to imagine the copious quantities of drugs which were needed in order for any executive to give this a green light.

It is based on a 1952 French novel, Les Animaux dénaturés by “Vercors” (a pseudonym for Jean Bruller), originally published in English as You Shall Know Them. The film rights were sold to producer Saul David, and Universal eventually acquired the production, albeit insisting that Jamaica be used as a stand-in for the setting of Papua New Guinea. Reynolds, then known more for his TV work, accepted the lead, turning down the role of Capt. Duke Forrest in M*A*S*H to play the part. The director was originally Richard Wilson, but he was sacked by David on the first day of shooting, and replaced by Douglas. I think Wilson probably got the better of the deal. 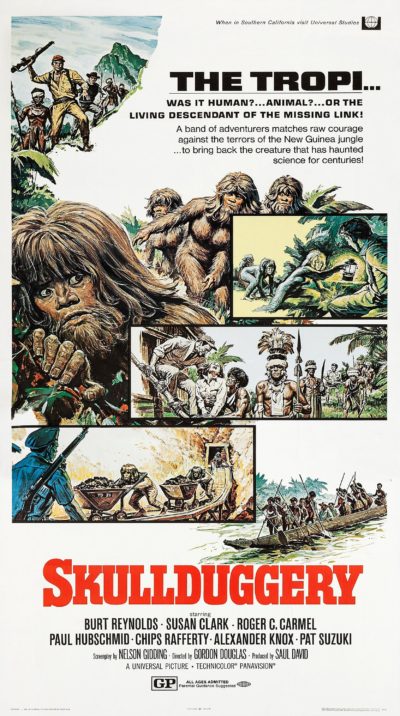 Proceedings begin tamely enough, as your standard jungle exploration film with romantic tension. Anthropologist Dr. Sybil Greame (Clark)  is mounting an expedition into the Papuan rain-forest, onto which local ne’er-do-well Douglas Temple (Reynolds) and his pal Otto Kreps (Carmel) attach themselves, after sabotaging her existing guide (Edward Fox, who thus manages to escape with dignity intact). Douglas makes passes at Sybil, to the point of almost harassment, which is extra creepy, since at this point in his career, he looked particularly like a Thunderbirds puppet. In the jungle, they find two things of interest. Firstly, a valuable deposit of minerals, at which the eyes of Temple and Kreps light up. Then, for Dr. Greame, a tribe of “missing links”, resembling a cross between Ewoks and long-haired golden retrievers.

The Tropis, as these humanoid creatures are named, turn out to be big fans of tinned ham. Fast forwarding a bit, they have been put to work by Temple as workers, Oompa Loompa style, in exchange for said processed meat. Despite the questionable nature of this arrangement from a moral point of view, everyone seems fairly content. However, Evil Mining Corporation Inc. has bigger plans for the Tropis, intending to start a breeding program, believing them to be just a new kind of livestock who can be used to carry out all manner of menial labour. Temple and Kreps are appalled at the idea, not least because…um, the latter is in a relationship with Topazia (Morita). And by relationship, I mean, she’s now pregnant.

This pregnancy matters because it may show the Tropis are human, not animals, and so have rights commensurate with that. Proving it, however, is another matter. The baby dies and Temple confesses to killing it, aiming to force a court case on the matter: you can only be guilty of murder of another human. Evil Mining Corporation Inc. does not want that, however, setting the stage for a courtroom drama including Col. Pickering from My Fair Lady as a Rhodesian racist, Blacula as the prosecutor, an invasion by some thinly disguised Black Panthers, and a highly unfortunate accident involving Topazia and a large bookcase. It all ends in a startlingly abrupt fashion with no particular conclusion reached, and the “jungle exploration film with romantic tension” seeming a very long time ago indeed.

That’s the main problem here: the jarring, complete disconnect between the two halves of the film. Well, that and the whole sex thing. Just as The Shape of Water will always be remembered here as the “I can’t believe she fucked the fish” movie, this will be referred to as  the “I can’t believe he fucked the missing link” film. I’m not sure why this was even deemed necessary. The murder case at the heart of the matter would have been just as valid with the death of an adult Tropis, surely? Questions about the nature and limitations of humanity are valid ones, to be sure. A rom-com with Burt Reynolds just isn’t the place for them. Though Douglas and Sybil’s relationship is basically discarded once mining gets under way, save for some more seventies sexist schtick involving a wheel-barrow.

It might be easier to take the second half of the film seriously, if the first half had shown itself as giving a damn about human life. At one point, they come under attack by natives, and a member of the party is killed by an arrow. The lack of reaction shown by Temple and his crew to this fatality is startling, and even the response when they discover the natives cook and eat the Tropis is curiously underplayed. The switch of Temple from lazy scoundrel to dedicated anthropoid rights campaigner, willing to risk a life sentence for them, is never convincing in the slightest, and it would take a far better actor than Reynolds to sell the transition.

Rather than the first day of shooting, it feels as if the director was fired half-way through, such is the sharp change in tone. Among the people originally interested in adapting the novel was Otto Preminger, and the second half feels like a better fit for him than Douglas, a director better known for his Our Gang shorts and In Like Flint. But everything about this is just horribly misconceived, from a meaningless but deceptive title through the casting, to the indecisive ending which resolves nothing at all. While this may not be as well-known as some slices of seventies weirdness like Myra Breckinridge, it’s not an ounce less bizarre.