I can only admire Miike’s willingness to try just about anything. In this case, that means a SF flick, about a mission to a newly terraformed Mars, in order to get it ready for colonization. This involves wiping out the cockroaches used in the process. Except, over the 500-year process, the cockroaches have evolved, and are now eight foot tall, capable of using weapons, and feel much the same about humans, as humans do about roaches. However, the astronauts have had their DNA combined with insect DNA. When triggered, they turn into a human/insect crossbreed, with the abilities of the respective insect, from amazing strength through to breathing fire. One is a literal Asian murder hornet. 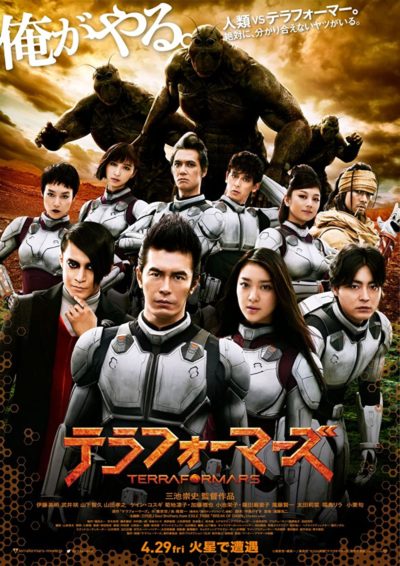 There’s a lot more going on here. As usual, there’s an evil corporate plan to bring a megaroach egg back to Earth, to create an army. The astronauts, meanwhile, are largely criminals (with the exception of a kickboxer played by Kane Kosugi), coaxed into taking part by the promise of a pardon and a fat reward. The man behind the mission, Honda (Oguri) “forgets” to mention quite a few details about the Martian situation – these are known because of a previous, covert mission. Oddly, nobody in the crew apparently thinks to ask why their craft is called BUGS-2. This sloppiness persists elsewhere, such as the random duration of transformations, or the real-time conversations from Earth to Mars. In reality, even at their closest, radio signals take over three minutes in each direction between the two planets.

I can see why Miike jumped at the chance, with plenty of opportunities for the crunchy and imaginative violence which he adores. The problem is, it doesn’t have any impact, because of the lack of development given to those receiving it. The spaceship crew is far larger than in needs to be, simply to provide a slew of cannon fodder, who might as well be wearing red shirts. I think for some of them, we got more screen time enthusiastically describing their insect capabilities, than we did devoted to their backstory or motivation. There may be a few faces you recognize, most obviously Kikuchi from Pacific Rim. But there won’t be many characters you’ll remember, for anything save their spectacular demises.

Chris mentioned how the style makes this look like a live-action anime, and she’s not wrong. This was based on a 22-volume manga by Yū Sasuga and Kenichi Tachibana, which spawned various spin-offs, including a couple of anime series. It might work better in that format, as the depiction of half-human, half-insect crossbreeds is more than a bit variable. Mind you, I could never bring myself to hate a film where someone metamorphoses into a human version of Mothra, complete with her flying about, sprinkling moth-dust everywhere. But just as in Godzilla: King of the Monsters, I could have done with considerably more Mothra. Instead, that scene only accentuates the unexplored potential in the ideas here.