When I read the synopsis of this, I couldn’t shake the feeling we’d seen it before. Heck, half-way through the trailer, it still felt that way. But I could find no previous review, and if I didn’t write about it, it didn’t happen. I suspect I may have been confusing it with a different “Adkins kicks arse as a single father in defence of his little daughter” movie. There seem to have been a few of them. Pro tip: if he proposes to you, politely decline. His wives always seem to end up kidnapped, in comas or flat-out deceased. As occupations go, being married to Scott Adkins appears to rank alongside deep-sea diving and Russian nuclear power-plant repair. 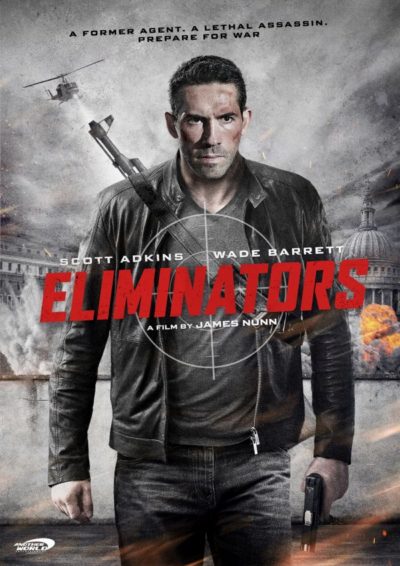 In this case, she’s dead, so he talks to her picture on the fridge. Scott plays Thomas, an American now working as a security guard in London, supporting his adorable moppet child.  He is very much keeping his head down and living below the radar, until a burglary goes wrong and splashes his face all over the media. That’s unfortunate, as it turns out he’s an ex-federal agent in witness protection, and his enemies are very happy to discover his whereabouts. In particular, Cooper (Cosmo), his late wife’s father, sends his top guy Bishop (Bennett) to eliminate Thomas, so Cooper can take custody of his grand-daughter. You will not be surprised to hear that Thomas is slightly unhappy about these plans.

What follows is more or less your standard, boilerplate chase/fight flick, with Thomas trying to get to his daughter, who has been taken into custody by social services (for good reason – never mind losing her mother, she witnesses so much carnage and trauma here, it’ll be a miracle if she doesn’t turn into Dexter), while Bishop tries to stop him. There are some nice uses of London locations, perhaps most notably the cable-car crossing the Thames near Greenwich, which becomes the location for a brief but intense fight scene.. Generally, it is only when the fists are flying that things come to life. Bennett was pro wrestler Wade Barrett, and his years of experience in carefully choreographed violence are put to good use here. Though Bishop can’t shoot for shit, even when Thomas is protected only by a small table (top). A career as a Stormtrooper beckons.

Dramatically, it’s less effective, with Cosmo particularly wasted. I mean, the guy has been in everything from Game of Thrones to Sons of Anarchy, along with the Holy Trinity of Scottish-set cinema (Highlander, Braveheart and Trainspotting), but gets basically nothing to do here. I was amused, admittedly to see both him (born in Clydebank) and Adkins (Sutton Coldfield) playing Americans. I guess they’d run out of genuine Yank actors. Even the motivations here are not particularly clear, and you’ll probably find yourself idly checking your watch (kids, ask your parents!), while you wait for the next Adkins vs. Bennett battle to show up. The good news is, save for a sluggish chunk in the middle, you usually don’t have to wait very long.