This plays a bit like an Icelandic version of Trainspotting, and we wondered what that should be called. Whalespotting? Geyserspotting? Glacierspotting? It certainly seems as if, based on this, there’s not much to do in Reykjavik, apart from take drugs and listen to shitty music. Though the results are at least somewhat more entertaining than that sounds, even if the makers appear to have adopted the method approach to drug movies, for the final reel. It’s more or less a love story, between Oli (Eagle) and Lóa (Jóhannesdóttir). The former is fleeing the cops when he ends up in the latter’s bathroom, where she has sunk beneath the water in a drug-induced stupor. 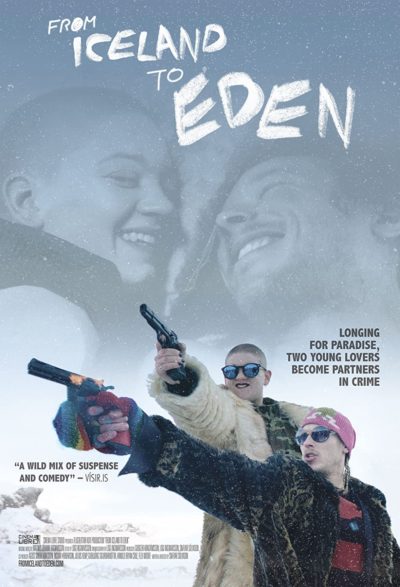 He rescues her, and there starts a relationship, largely driven by their mutual interest in illicit pharmaceuticals. They begin transporting and selling drugs for local criminal, Tumi (Finnsson), and his father, the city boss known as The Fly (Jónsson). When they stumble across a large package of cocaine in the home of a dead dealer, they opt to swipe it and call an ambulance, in the belief The Fly will think the authorities seized the drugs. Yeah. Like a drug lord is not going to notice somebody suddenly pushing coke, in a city with about the population of Eastbourne. As anyone who has seen True Romance knows, amateurs selling drugs they stumbled upon never tends to end well.

In this case though, it’s hard to be sure exactly how it ends, for after The Fly raids Oli and Lóa’s apartment, and they decide to strike back and reclaim their gains… things get weird. Clearly, they don’t go anything like to plan – especially for Oli, who is basically a peaceful hippie, whose idea of drugs is mostly ‘shrooms and peyote. But thereafter? Your guess is as good as mine. Maybe they were abducted by aliens. Or died in each other’s arms of a drug overdose. It’s hard to be sure, but it’s certainly about as much fun as it usually is, watching other people take drugs and make out. Which would be “not very”. It’s about as annoyingly vague as the ending of 2001.

Fortunately, the film isn’t without its pleasures to that point, most obviously the characters. Everyone here is quite memorable, and while they might not be the kind of people you’d want to deal with on an everyday basis (depending on your tolerance for Scandistoners), an hour and a half in their company is tolerable enough. It also counts as a Christmas movie, events unfolding largely over the course of the festive season, complete with a rousingly punky Icelandic version of Sleigh Ride. Surely it does paint a somewhat skewed image of the Icelandic capital. I can’t believe it’s quite as much a perpetually drug-hazed den of iniquity as this depicts, with everyone more or less out of their mind on one thing or another. Still, I guess it’s either that or going for a bit of Puffinspotting…