This film purports to investigate a mass murder in a small and remote Arizona town in 1961. The victims were five members of the Jenkins family – the two parents and their three children – along with a pair of visiting children. All seven were killed in one night, by an unknown assailant using a hammer and a knife. Suspicion fell on Yancey McCord, a local who was quickly taken in to custody by the local constable. Only. McCord was released or escaped from custody less than 24 hours later, and vanished. The constable quit his position a few days later, and the whole incident was quickly forgotten. Was McCord the killer? What happened to him? Perhaps there was another perpetrator or perpetrators? 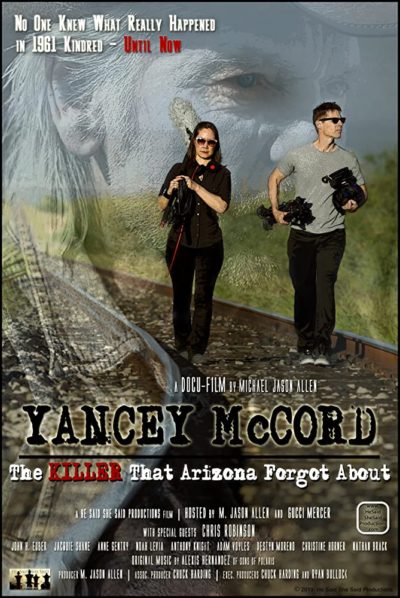 Except, it’s all total bollocks. Never happened. The supposed location of Kindred Township doesn’t exist. This whole exercise is fake, a mockumentary created entirely by “host” Allen as he and Mercer supposedly investigates the crime. I have qualms about the way this was marketed, basically lying to the viewer. Tubi has it classified as a documentary, and other online sources also refer to it as a “true crime documentary.” The makers themselves are slightly more circumspect, Allen saying “I’m excited for this docu-film to have the opportunity to be seen by audiences who love the documentary style true crime film genre.” Hmmm. “Docu-film.” But their site touts the presence of Hollywood veteran actor Robinson, who plays McCord – to be honest, he is easily the best thing here.

I’d have been prepared to cut it more slack, had the deception been executed with some finesse, or even care. But it’s sloppily constructed and carried out. For example, they interview “Nicholas Hissman, the former lieutenant-governor of Arizona.” Except, never mind the person, that position doesn’t exist: Arizona has never had a lieutenant-governor. Similarly, we’re expected to believe McCord, unheard of for over half a century and now living under a new identity, just wrote to the film-makers and offered them an interview. Really, that’s the best you can come up with? The interviews with former Kindred residents are poorly scripted as well, too often asking questions which shed no meaningful light on the subject. Similarly, we just don’t care about the dilapidated general store in “Kindred”, that it still has its shelves numbered, or the mirror into which the constable looked every morning.

I was amused by the makers’ problems finding the ghost town, though I’m not sure this was intentional. Maybe that was the whole point. This isn’t a bad mockumentary, it’s a parody of bad mockumentaries. I suspect that might be too meta to be credible. Though it would go some way to explain the startling (or less charitably, completely ludicrous) way in which this finishes. No, seriously: think of the stupidest ending you can, involving someone who avoided even an arrest for multiple homicide over almost sixty years. It still won’t be as bad as they one they came up with here.