Let’s start with the positives. It has some proper stars involved in the shape of a portly looking Crowe, an energetic Gosling and a well preserved Basinger. The story (not to be confused with the script) is actually not bad. It’s as well shot as anything should be with these three, some of the cars are nice and very shiny, and the soundtrack is broadly okay.

Now, assuming you’re thinking ‘Whaaaat?? An E-? Really!?’, well my most written, overwritten, re-written, underlined, capitalised note was “God it’s awful!”, itself a phrase that was continually falling from my lips. This is a film that should come with an ’18 certificate’. An inverse one. No-one older than 18 should be allowed to watch the film, and then only in the presence of a teenager who has been filled up with orange sweets and fizzy-pop, and then given an exciting roller-coaster ride.

Overall it’s childish like Airplane, just not actually funny or nearly as well realised.  The ‘hilarious’ breakup line of “Jack, I’m fucking your dad.” really sets the tone perfectly and generally the dialogue is at best perfunctory, as it tries to ram down our throats just how hilarious it is. And along the way we have Gosling playing Ryan Reynolds channelling Jim Carrey, Crowe actually making a half decent fist of acting the puerile drivel he’s been given, and Basinger turning up on full auto-pilot, breaking the fourth-wall and leaving as much of an impression as a fart in a spacesuit. 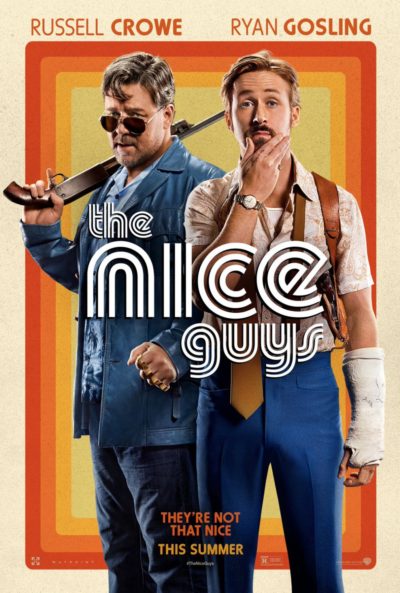 The underlying issue is that the film doesn’t seem to know what it’s trying to be. Is it: noir; smart-sassy; cute-slapstick; Marlowe with baggage; a hilarious comedy; LA Confidential set in the ’70’s; a daddy/daughter bonding tale; an odd-couple buddy movie; a tough little PI/crime caper; a morality tale; a kinetic all-action movie; social commentary; a cop movie; TV pilot? OH GOD! Well, just for fun they try to achieve all of the above whilst also making sure that everyone fully understands how hilarious this film is by making every character sassy, precocious and wise-cracking. I’m faintly surprised that they didn’t add a canned laughter track. It wouldn’t have seemed out of place.

It is simply a total cluster-fuck of a mess and I’ll be amazed if you get through the first ten minutes without your spider-sense tingling horribly.  If you make it past twenty minutes you deserve a medal. And a top-up with a very stiff chaser. I was rather drunk when I watched it first time and so thought ‘Nah… it can’t have been that bad… surely..?’ Second time, about a third of the way through, I paused it to go out and buy beer. A lot of beer. All of it 5.5% ABV. Now, being pissed won’t necessarily make this a better film but it might (hopefully) blot some of it from your memory.

And the end? Well, they saved the ‘best’ for last, and it feels mind-spinningly stupid. By now it is really hard to know what sort of film they thought they wanted to make, and the straight-to-camera ‘serious moralising’ is vaguely vomit inducing, as well as frankly ridiculous and completely out of keeping with the whole film.  Or perhaps.  Completely in keeping with this inconsistent mess. Here are more notes made until I gave up making them at around the half-way point.  Verbatim:

“Sometimes I feel okay about things. Not often though.” I can only assume that Crowe’s script became self-aware at 2:14 a.m., EDT, hence “I think this is going to work better if we split up…” which I assume to be aimed at any remaining viewers.

“What’s going on?” “Let’s deal with the rotting corpse.” No, let’s not, let’s just bury the stinking mess and forget about it. Please.

So, this film with no-name actors might have been a D+. But it’s not. It’s got some good actors, the underlying story actually isn’t bad, and I can’t shake the feeling that if they’d nailed their colours to making a proper 1970’s crime thriller akin to Heat in tone that it might have been a cracker. It’s the waste of potential that irks as even Gosling can play Gosling quite well, and you only have to think of LA Confidential to realise the quality that Crowe and Basinger can bring. But sadly even they can’t make a silk purse out of this low viscosity excrement. So. E it is, and an E- at that, and I strongly suggest you go and watch LA Confidential (again) instead of this utter utter drivel.

TL/DR: I hated this film and much preferred watching the TV adverts, whereas you may love it as it actually received pretty decent reviews elsewhere. FYI it’s billed as an “Action/Comedy”. Good luck. Please don’t let me know how you get on.