I probably should have known to be more cautious. This was slapped into my Tubi queue, based on the cast. But if I had paid attention, I’d have realized the director was the man behind Pontypool. That was one of the most cryptic and, I’d say, over-rated horror movies of the 21st century, being a zombie movie apparently more interested in language than zombies. Similarly, this has a vampire in it, but why, remains uncertain. It’s definitely not a vampire movie, by even the loosest definition. It appears to be a conscious attempt to defy genre categorization. While that’s not necessarily a bad thing, the results here feel too damn self-aware for their own good. McHattie is, as in Pontypool, the film’s major saving grace. 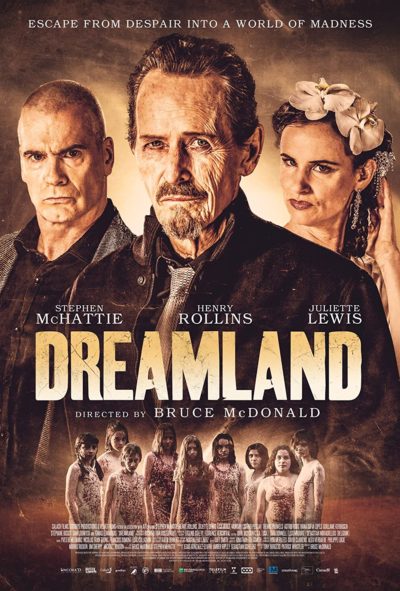 I was surprised to discover he’s still only 75, even now, for he seems to have been in his seventies forever. I think Harry Dean Stanton is probably the only 0ther actor whose face doesn’t just seem lived in to the extent of McHattie’s, but occupied by a large group of squatters. McDonald takes full advantage, with a slew of close-ups which will leave you very familiar with every crease on his lead actor’s face. Not least because McHattie plays two roles here. He is a trumpet player, who has been hired by the Countess (Lewis) to play at the wedding of her brother (Lemarquis). Who happens to be the vampire, with a taste for underage girls. McHattie is also Johnny, an enforcer working for local crime-boss Hercules (Rollins), who is providing the bride, and tells the assassin to bring him the trumpet-player’s little finger, after an autograph incident. But seeing Hercules now dealing in kids causes a moral crisis in his employee.

There are a number of interesting ways this could have gone. McDonald avoids most of them with a dedication to his own intentions that can only be admired. Except, he never even commits to any of them. Is is a “reluctant killer” thriller? A black comedy? A vampire film? Too often, it feels as if every single character is the central one in their own movie, operating independently from everyone else. Even the two versions of McHattie don’t seem to mesh. While technically, the shooting is well-enough done when they share screen space, it never feels like they are reacting to each other.

It can’t have been easy, and I will say, the cast likely does as well as they can with the material. Rollins and Lewis are solid as usual, and Lemarquis’s pedo-feratu deserves a film of his own. Just not one directed by McDonald. For if this convinces me of anything, it’s that I was right about Pontypool, and that McDonald is not so talented as some have claimed. It does look interesting, making the most of its Luxembourg locations, and two McHatties are certainly better than one. On the other hand, one McDonald appears to be too many.