I have to say, this actually surpassed expectations. Admittedly, those were largely based off the 2.4 score on the IMDb. On that basis, managing not to be terrible has to count as a bit of a win, even if the end result still falls into the category of there being Brontosaurus-sized room for improvement. Certainly, if you’re expecting anything approaching a certain other prehistoric franchise, you are going to be terribly disappointed. You also have to remarkably precise with your pronunciation of the title. Slur the two words together, and it could easily be mistaken for a Joe Biden biopic. [I’ll wait. As long as it takes. Forever, if necessary] 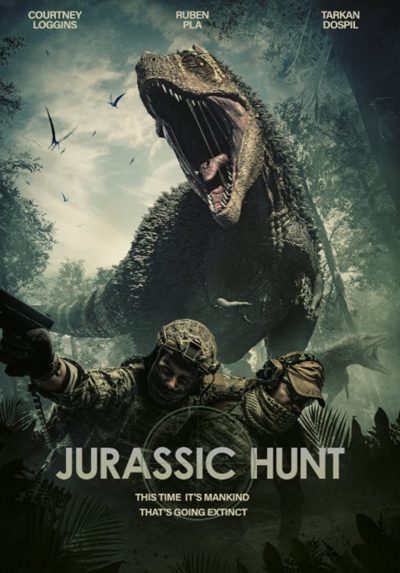 It is, of course, about dinosaurs. In this case, a big-game safari experience featuring them, run by the ambitious Lindon (Sinclair), which gives those with the inclination and the money, the opportunity to hunt prehistoric reptiles. A new batch of customers has just arrived, and it’s quickly clear that Lindon is very keen for his operation not to be revealed to the world in general. However, it’s not long before things start to go very wrong for the members of this party, including Parker (Loggins), Torres (Pla) and Valentine (Dospil). Their host isn’t coming to the rescue. Indeed, he appears to be cheering on the dinosaurs in this particular match-up. Yes, someone says, “The Jurassic hunters have become the Jurassic hunted.” They go there, folks.

Turns out Braxtan has a fondness for monster movies, though I haven’t seen his previous works such as Unnatural (polar bear vs. humans) or Snake Outta Compton (three guesses). On the basis of this… well, I won’t be actively seeking them out. Yet, nor will I be actively changing the channel, if they were to show up on the SyFy Channel. It opens briskly enough, and the dino-effects are… okay. Operating on their own, they pass muster, but any attempts at them interacting with the human characters is not so hot. It doesn’t skimp on the mayhem, though does skimp on the physical gore, sadly too often opting for pixelated pints of the red stuff instead. This is as unconvincing as it usually is. Still, I did enjoy particularly enjoy the scene where one hunter was faced with wave after wave of baby raptors.

The plot is fairly basic, and the characters are never given the depth necessary for this to escape the “direct to streaming” ghetto. Parker is about the only one given credible motivation, though she stands out from the others in a host of ways. If you’re wondering why a vegan is on a prehistoric big-game safari… yeah, this might play into why Lindon is keen for them to become dinochow. This makes no sense, however, since we’re see him dispose of an infiltrator earlier with no qualms. So why not do so again? In order for the movie to happen! If you’re prepared to cut the film the necessary slack, it’s okay. Then again, if you’re watching a film called Jurassic Hunt, you are likely in self-inflicted wound territory, and have lost the right to complain.