I hadn’t realized that Lundgren had been directing movies, since as far back as 2004’s The Defender. But it has been a while: this is his first time occupying the chair for more than a decade. I haven’t seen any of his previous works, so can’t compare, but this does feel a bit rusty. Mind you, you could argue the issues are more with the script, and it’s an viewpoint I’d be willing to hear. The core idea is good, but for what should be a non-stop adrenaline rush, there seems to be a lot of faffing about before we get to the “Die Hard in a building about to be demolished” elements. 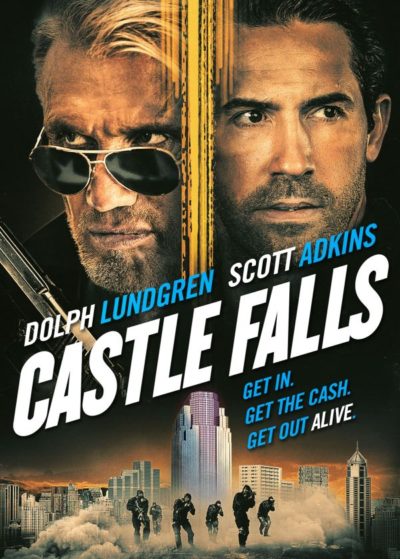 The hero is Mike Wade (Adkins) who, in a remarkably accurate bit of casting, plays a guy from Birmingham. That’s the one in the English Midlands, though in a confusing twist, he ends up in the Alabama one, working on tearing apart a hospital, ready for its explosive demolition in a few days. Turns out there is three million dollars which was stashed away in the building’s innards. Mike stumbles across it, but also looking to retrieve the loot are drug dealer Deacon Glass (Hunter) and his gang, plus separately, prison warden Richard Ericson (Lundgren), who needs the money to cover medical bills for his sick daughter (DeLonghi). The three parties collide, with just 90 minutes before the bombs go off and bring it all down.

First off, there’s too much back story. Wade, for instance, is a former MMA guy who moves up from Atlanta, after losing a bout which was his final chance at the big time. Really, this could have been established in 30 seconds of well-crafted dialogue. We did not need to see him pleading with the gym owner for a shot, the bout in full, then Wade moving out of his apartment, giving his gloves to a couple of local kids and driving to Birmingham (no: the Alabama one…). Similarly, we don’t need to see Ericson chatting to his daughter, her nurse and the insurance company about his family situation. Half the film is spent on this kind of thing, before the participants meet up and arses start getting kicked, which is why we’re here.

Things do pick up thereafter, with the half-demolished building offering a good range of environments in which to play. Naturally, Mike and Richard team up, as the people who want the money for more altruistic purposes, going up against Deacon and his crew (they include Dolph’s daughter, Ida – her fate is quite amusing, if likely to provoke familial strife!). There’s no surprises in the way things unfold from there: it’s not hard to work out who will get out, just ahead of the demolition. Must say, the authorities seem oblivious to the gun-battles, plummeting bodies, etc. taking place in a supposedly deserted building. It’s all just a bit too predictable, and will likely be forgotten not long after you’ve watched it.