I fear I may need medical help, because the erection I got from this has lasted substantially longer than four hours. The main problem with 2014’s Godzilla was not enough Godzilla, and too much Aaron-Tayler Johnson. This time, there’s plenty of Godzilla – along with contributions from other members of the Gang of Four. There is still, probably, too much from the humans, in particular Kyle Chandler and Vera Farmiga as animal behaviorist husband-and-wife team with issues, Mark and Emma Russell. The plot largely concerns the latter’s efforts to create a machine, codenamed ORCA, which can ‘speak’ to the titans, which is then hijacked by eco-terrorist Alan Jonah (Charles Dance) who intends to free them all, effectively doing a hard reboot on planet Earth.

The end result of these ill-conceived ideas is three-headed dragon Ghidorah rampaging around the globe, in charge of all the other titans with the exception of Godzilla and (SQUEEEEE!) Mothra. Humanity’s efforts to take out Ghidorah only succeed in grievously wounding G, who retreats to his underground lair to rest and recuperate. With the help of some thermonuclear therapy, he comes off the bench to join with Mothra and take on Ghidorah and Rodan. The resulting battle will open up a large amount of downtown Boston for redevelopment, shall we say.

This feels considerably more “for the fans” than the original film, and that might be part of the reason why it has under-performed at the box-office. Going from Godzilla to this, does feel like jumping straight from Iron Man to The Avengers. In the original Japanese series, we didn’t get this fatal four-way until the fifth Godzilla movie, 1964’s Ghidorah, the Three-Headed Monster. So rather than building, for example, the importance of Mothra and her role in the kaijuverse through her own movie, here she just… hatches. We were perfectly fine with that – I loved both the use of her theme on the soundtrack, and subtle nods like Dr. Ilene Chen (Zhang Ziyi), the scientist who knows most about Mothra, being a twin. But it’s probably why we got ignorant reviewers writing Mothra off as “a giant disgusting moth.” Really? 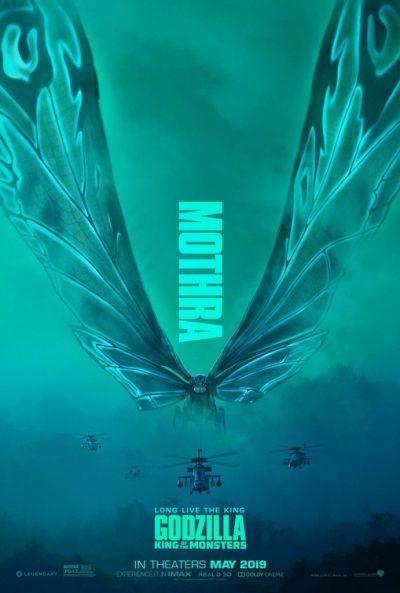 Indeed, “Needed more Mothra” is probably my main complaint, to be honest. Even just a few seconds longer would have been welcome, to appreciate her beauty after she came out of the cocoon – rather than cutting away almost immediately to Millie Bobby Brown pouting or whatever it was. Similarly, at the end, giving the general audience some explanation about Mothra’s dust and its role in the final battle to power-up Godzilla, would have been nice. What’s not in question is that here, she is considerably more bad-ass, in both design and actions, than in the Japanese versions. This moth is pissed, and goes toe-to-toe with Rodan in a fashion that’s quite surprising.

I am extremely glad to have gone to see this, not just at the cinema, but in IMAX [our first trip there since Avatar, from which Chris’s stomach still hasn’t quite recovered]. For the fights here demand to be seen on the biggest screen possible, with a sound system that is being investigated by the United Nations as a weapon of mass destruction. No complaints there, although I’m a little concerned as to how this high-intensity spectacle will transfer to a smaller home screen. There were occasionally points where things were taking place in lighting conditions which work better in a cinema – especially compared to our living-room, which is more open-plan than theatrical. And is in Phoenix, where daylight rivals G’s radioactive breath in intensity. That said, at the movies, it was quite awesome. I’m struggling to think of the last movie I saw which was so overwhelming a sensory experience.

As usual, I could have taken or left the humans, who are a bit of a mixed bag [there’s nothing new here: the same goes for almost all the Japanese movies too]. In terms of human/monster balance, it’s certainly an improvement over the bait-and-switch of its predecessor. However, there are probably too many stories going on: Jonah’s Kaiju First terrorism; Emma’s Doctor Dolittle-like efforts to talk to the animals; Mark’s resentment over Godzilla having been responsible for the death of his son. The story could easily have lost one of these, and been better for it. This is rather nit-picky, like complaining about unrealistic dialogue in a porn flick. These scenes are necessary, simply to let you catch your breath and reset before the next overwhelming set-piece. Their content is borderline irrelevant.

It likely doesn’t count as any kind of spoiler, considering they’ve already announced Godzilla vs. Kong, to say that G triumphs, and the film’s final shot is near-perfect as a result. The remaining titans gather round him in what remains of Boston, and lower their heads in supplication. [“NOW, there is a god…”] They weren’t alone. Hail to the king, baby.