There’s something ironic in the fact that a film about soulless copies is, itself a soulless copy. This is far too familiar territory, going down paths trodden repeatedly since the first Invasion of the Body Snatchers in 1956. I think it was when the alien copies here did the ‘scream’ thing, lifted wholesale from the 1978 version of Body Snatchers, that the last hope of any originality left. My interest decided it had better things to do, and by god, it was going to do them. By the end, I was less concerned in the fate of the characters, than how the hell I was going to find 500 words to write about it. I’m tempted to simply copy and paste someone else’s review without attribution, as a post-meta comment on the approach apparently taken by the creators here. 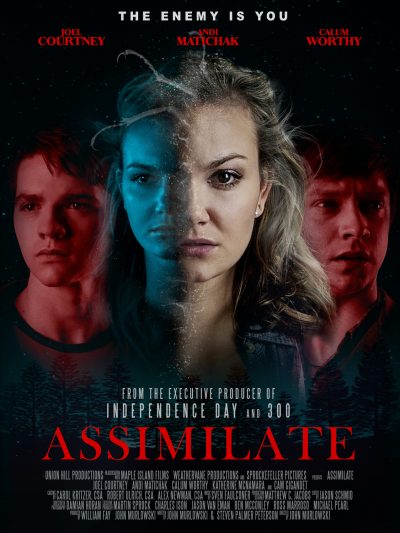 Teenage friends Zach (Courtney) and Randy (Worthy) are stuck in the small-town hell which is Multon. To alleviate the boredom, they start a vlog documenting life around the town. However, after witnessing an animal attack on another resident – only for the victim to re-appear, miraculously whole and denying anything happend – they begin to realize things are far from normal. Internet and mobile service has been cut off, and there are indications that a steadily-increasing number of Multon’s inhabitants have… changed. What should Zach and Randy do? Who can they trust? How can they escape? If you’ve seen any of the multiple versions of Snatchers, you’ll know the answers already; and making the protagonists teenagers battling this alien threat is no more inventive, if you saw The Faculty twenty years ago.

On the plus side, the lead characters are not unlikable, Zack and Randy being joined by classmate Kayla (Matichak), as they try (and fail) to convince the local authorities of the threat. They then decide to take matters into their own hand, and break in to the local internet company, in order to upload their footage online.  However, this aspect is entirely ludicrous, apparently written by someone with no fucking clue about IT. Apparently, such companies keep their key hardware in an unlocked room, labelled “Server Farm”, with a sign conveniently pointing to it from the foyer. I work at a web-hosting company. In our facility, you can’t take a dump without a key-card, and we don’t even have the servers located on-site.

This demonstrates the generally sloppy and bare minimum approach here, with just a couple of exceptions. One siege sequence is effective, yet blatantly taken from Night of the Living Dead. The only memorable moment this can remotely call its own, sees a horde of the copies overturning a mobile home in which the heroes are hiding out, which was surprisingly well-staged. For all other purposes, however, you’d be better off watching any of the versions of Body Snatchers – even Abel Ferrara’s. This film about unwanted replacements is certainly not wanted by me, and little more than replacement-level.