It has been a long time since I’ve seen a JC flick – probably 2003’s The Medallion, which goes to show you how crap that was. Of course, he’s no longer the incredible death-defying rubber-ball of his prime. Now in his sixties, much of the action scenes here were spent playing a game of Spot the Stand-in. [“That’s Jackie Chan… Not Jackie… Not Jackie… That’s Jackie.”] This is still entertaining enough, even if it feels like two different films were joined at the hip, and Jackie’s character spends a good chunk of the middle hiding in foliage. 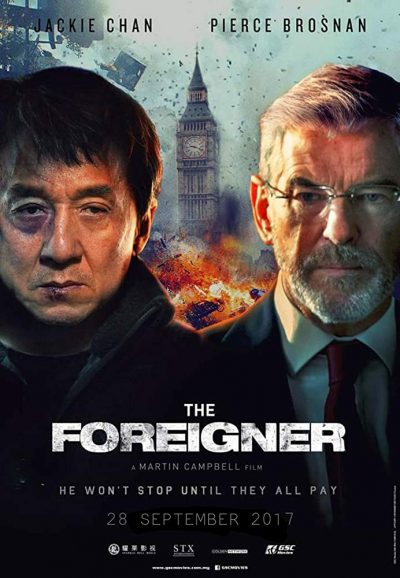 Chan plays Ngoc Minh Quan, whose daughter is killed in a terrorist bombing carried out by a splinter group of the IRA. He vows to make those responsible pay, and to that end, targets Liam Hennessy (Brosnan), a former terrorist who has now publicly renounced violence and become Deputy First Minister of Northern Ireland. He still has contacts with his old pals, however, and is keen to find out who has been feeding the splinter group explosives and information, before the British Army returns to the streets of Belfast. Quan has his own set of special skills, acquired in the Vietnam War, and after polite inquiry gets him nowhere, turns the screws on Hennessy with an escalating terror campaign of his own. The Irishman brings in his nephew, Sean (Fleck-Byrne), a former special forces soldier, to locate and stop Quan.

So, what you have is part Quan running round the woods like a Vietnamese Rambo – the irony there is obvious and, one presumes, deliberate. Though, inevitably, the makers got flak for casting Chan: I can only presume Scarlett Johansson was unavailable. Meanwhile, Hennessy is trying to expose the forces seeking to derail the peace accord, while simultaneously carrying on an affair. These two elements are both quite good on their own. After the death of his daughter, Quan is destroyed, and Chan does an excellent job of putting over that pain, simply in his eyes. It’s a level of genuine acting which surprised me. Brosnan, re-uniting with the director of the best Bond in 30+ years, Goldeneye (#ChangeMyMind), is also against type. Hennessy is a man who can’t distance himself from a violent past – he was known as ‘The Butcher of the Bogside’, a name given to actual terrorist-turned-statesman, Martin McGuinness.

Though it does point towards one of the issues here. This is based on a 1992 novel set in the eighties, and would have played better in an era when the Irish peace process was on shaky ground. Yet it seems to take place in the present day, not least going by the London skyline. There are, shall we say, rather more obvious terrorist threats to the nation’s capital now, than disgruntled Guinness drinkers. It’s also rather contrived at certain points. For example, the terrorists are under observation by British authorities, who are about to swoop in when Quan shows up, pretending to be the gasman. Rather than precipitating their raid, they just sit back and let him get his vengeance, despite the resulting high volume of bullets. Yet I’ll let it slide, because watching Chan kick ass remains a pleasure, even if age is clearly taking its toll.