A fairly-generic action flick is enlivened by a few touches of weirdness, but in the end, becomes just a lot of running around and shooting. James Silva (Wahlberg) was orphaned at an early age, and ends up becoming a military man, despite (or because of) his rather flaky people skills. He’s part of a secret group called Overwatch, offering a third option to solve problems after diplomacy and regular military action fail. Their current task is to hunt down a stash of caesium, which could potentially be turned into multiple dirty bombs. A lead occurs when policeman Li Noor (Uwais) walks into a US Embassy in South-East Asia, stating he has vital information about the caesium, but won’t give it up until he is out of the country. It soon becomes clear that local authorities have no intention of letting Li and Silva complete the necessary 22-mile trip to the airstrip. 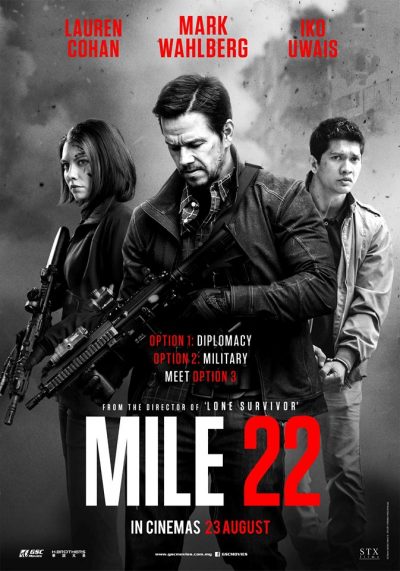 It’s good to see Uwais getting a chance in a Western film, though unfortunately, it continues the trend of great martial-artists being hamstrung by directors who don’t understand how to showcase their talents [see also Jackie Chan and Jet Li]. Berg inflicts on both us and Uwais the shitty editing style which has derailed so many action films in the last decade. As a resiult, the movie lets us watch Uwais’s talents in awe, only for brief spurts, rather than drinking from the continuous fire-hose of wonder provided by films such as The Raid [an obvious inspiration for a sequence in an apartment complex] or The Night Comes for Us. The same is true of former MMA (and now, former WWE) star Ronda Rousey, who gets even less chance to shine.

The aspect which somewhat elevates this are the eccentric characters. Although Silva might be a good dude to have in a fox-hole, his managerial talents leave a lot to be desired, constantly berating his colleagues for their perceived failings. But he’s positively normal compared to the weirdness of John Malkovich’s portrayal of “Mother”, Overwatch’s boss. He appears to love dropping H.L. Mencken quotes, such as “Every normal man must be tempted, at times, to spit on his hands, hoist the black flag, and begin slitting throats.” I’m not sure how prevalent this genuinely is at the upper echelons of the military establishment. Still, it’s fun to see, and I was also amused by the way Colombia stood in for South-East Asia.

The rest, though? Generic stuff, down to having a bunch of Russians sniffing around the edges – though you see so little of them, it feels almost like a token gesture. At least, until the end, when they suddenly assume overwhelming importance, in the severe non-resolution which passes for a finish. The intent is clearly to set up Silva as a franchise, like Jason Bourne. I’d be considerably more interested if they set up Li as its centerpiece – providing, at least, the movies were helmed by someone capable both of keeping the camera steady and shooting more than five frames at a time.