This is hidden behind a bland poster and such a thoroughly generic title, I literally had to Google “Indonesian action films” to remember what it was called. There’s every reason to whizz past it on Netflix before the automated, unskippable preview starts blaring. But you’d be missing out on what’s likely the best action movie of 2018. They should have called it Die Hardest, because it would be a more accurate, appropriate and eye-catching title. I don’t think I have ever seen a gorier action film, though I would have to re-watch The Story of Ricky before I am able to make any definitive statements on that front.

At first glance, it seems Indonesia might be an unlikely source for a challenger to the title. After all, it’s the biggest Muslim country in the world [and with a total population of 265 million, likely falls into the category of #BiggerThanYouThought] – not exactly a faith you generally associate with the more outrageous end of exploitation cinema. Certainly, this skews 100% towards one end of the sex ‘n’ violence spectrum, with no nudity whatsoever. But in terms of carnage, it’s merely the latest in a long line of Indonesia ultraviolence, dating back to the eighties. Then, the country gave us the likes of Lady Terminator, and Barry Prima was churning out blood-spattered flicks like killer shrubbery movie, Special Silencers. Night is the spiritual successor to these, albeit with better production values and far superior martial arts. 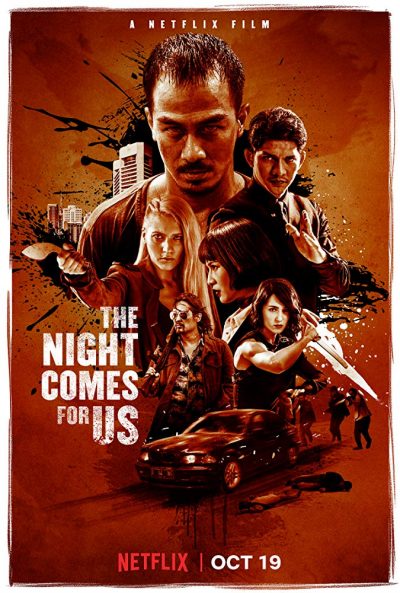 The latter should not be a surprise if you’ve been paying attention, with 2012’s The Raid: Redemption crashing onto the scene like a cannonball. As such, it sits alongside what Ong-Bak did for Tony Jaa and Thai-fu, Raid introducing the world to the talents of Iko Uwais and the style known as pencak silat. Uwais is the main villain here, and I’d also have to rewatch The Raid to figure out whether I preferred it or this. My immediate reaction would be that Night reaches greater heights, yet Raid is perhaps more consistent in terms of tone. For perhaps the main “problem” here is that the action scenes are so good, everything else inevitably pales by comparison. Quotes used advisedly, since as cinematic issues go, you could do worse.

Ito (Taslim) is one of the Six Seas, the top-level enforcers for the South-East Asian triad, who control just about all criminal operations in that part of the world. His latest task is to exterminate a fishing village which has been caught skimming from his employers’ trade. Yet when he sees a young girl, Reina (Bermudez), whose parents have just been killed, sobbing on the beach, something cracks and his long deeply-buried humanity is resurrected. He saves Reina, knowing full well that by doing so, he will bring down the wrath of his bosses. The resulting war pits Ito and his allies against escalating waves of minions, sent to make an example of his disobedience, and leading to a battle against Arian (Uwais), a rising and ambitious prospect.

What’s amazing here is the film’s ability consistently to surpass its own efforts. The first fight scene would be a worthwhile and satisfactory climax to 90% or more of martial arts films made in the last two decades. Your adrenaline levels have barely begun to decrease toward normal, before Ito heads off to a butcher’s shop to claim the money he is owed. The film then proceeds to one-up itself, using all the tools you’d expect in such an environment, and then some – I certainly haven’t seen anyone stabbed to death with a bovine bone before. Rinse and repeat the rest of the way, piling spectacle on spectacle like a gore-drenched game of Jenga. If you want a pull-quote to sum up this approach, here’s one: “There’s no way they could possibly surpass th… Oh. Never mind. Please continue.”

I suspect, somewhere in director Tjahjanto’s desk is a big manila folder, stuffed to the gills with paper, and “SPECTACULAR AND UNPLEASANT THINGS TO DO TO THE HUMAN BODY” scrawled on the cover in red biro. For he and his team must have burned barrels of midnight oil, brainstorming this shit. Other films break a window with a guy’s head. This one does so… then uses the serrated fragments left in the frame for throat-slitting. It perhaps reaches Peak Mayhem when Ito shows up at a warehouse containing everyone in Indonesia who knows how to fight. Or maybe it just seems that way. This is where we get the picture at the top, which made me snort out loud. “Safety starts with me,” is as ironic a sign for this movie, as one in Jurassic World would be, proclaiming, “This is a velociraptor-free workplace.”

The other, especially glorious battle occurs after Ito fends off an independent killer intent on collecting the bounty, and convinces her to take care of Reina while he’s off banging heads together. The indie assassin is known as The Operator, and is played be Estelle, who was “Hammer Girl” in The Raid 2. [She hopes, eventually, to work her way up to playing someone with an actual name.] She is basically the baddest-ass babysitter ever, and this spoonful of sugar helps the bad guys go down. In particular, she has to take on a pair of lesbian weirdoes – that’s exactly how the movie describes them – Alma and Elena. Below, is their fight.

I could probably write 500 words on the wonders of this trio alone, who have each already established their credentials before facing off. Alma (Dian Sastrowardoyo) wields the most startlingly lethal yo-yo variant since Kill Bill Volume 1, one whose wire-like string is capable of flaying the flesh from its target’s bones. Elena’s weapon of choice is the kukri, a Nepalese machete (though she speaks French here, she’s played by Hannah Al Rashid, who was born and brought up in London, and represented the UK in pencak silat for five years). When they go up against The Operator, it’s likely the best three-way dance between female martial artists I’ve ever seen.

This also highlights one of the outstanding things about Night: even relatively minor supporting characters are extraordinarily tough and have awesome skills. The Operator rips her own finger off, after it’s damaged by Alma’s yo-yo. Or there is Ito ally White Boy Bobby, who has one foot, and is still harder-core than anyone this side of John Wick. It’s perhaps this aspect where it differs most from, say, John Woo movies such as The Killer, where Chow Yun-Fat took a similarly honorable approach to mass murder, and was clearly the focus and hero. Here, to be honest, Ito may or may not make it into the top five of the movie’s most interesting characters.

I honestly couldn’t tell you whether the acting performances of Taslim, Uwais or everyone else involved, are any good or not. They could have been reading pages from the Djakarta telephone directory, and I wouldn’t have noticed, because all I could hear was my brain buzzing from the high of the fight sequences. There were perhaps a couple of scenes where I got ever so slightly bored, wondering when the next phase of Project Mayhem would kick off. Yet, considering this runs over two hours, there’s impressively little dead weight. I just hope this film manages to find the audience it deserves, among the torrent of less-worthy original Netflix content, such as The Chilling Adventures of Sabrina.