Another Hollywood remake deserving to be filed under W for “Why?”, Coppola apparently wanted to tell the story more from the women’s point of view. Which, ironically, helped lead to her instead being eviscerated for eliminating all African-American characters and influence from her version, being airily dismissed in three words: “The slaves left.” Those who live by the SJW sword… The plot remains the same, with wounded Union soldier Corporal John McBurney (Farrell) being found in the woods near a girls’ school in the latter stages of the Civil War. He is taken in, somewhat reluctantly, by its headmistress Martha Farnsworth (Kidman), and his presence there creates increased tension and, eventually, strife among both staff and pupils. 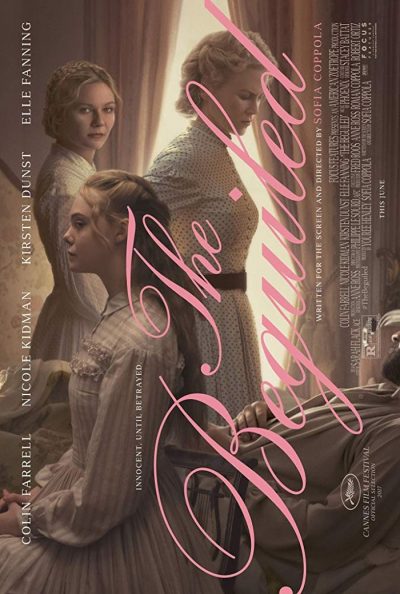 It feels considerably less lurid and sleazy than Don Siegel’s 1971 version, omitting both Martha’s incestuous flashback, and the soldier’s relationship with the younger girls at the school. Here, he goes little further down the age scale than Amy (Fanning), though there’s still the same love quadrilateral between them, Martha and teacher Edwina Morrow (Dunst). Farrell never gets to do much in the way of acting: in the first half, he’s largely reduced to lying in bed making puppy-eyes at everyone who passes [a full-time occupation; despite Martha’s stern admonitions to her pupils to stay out, his room resembles Grand Central Station at times. If you want to keep people away, lock the damn door, why don’t you?]. Then after he’s caught in bed with Amy, falls down the stairs and his his leg sawn off by Martha, it’s mostly yelling, to little effect.

Kidman does fare better, bringing exactly the right combination of chilly hostility and repressed passion to proceedings, culminating in her character’s tight-lipped pre-surgery request: “Bring me the anatomy book.” No-one else makes much of an impact, the rest of the cast being a near-interchangeable selection of rustling crinoline. In this version, the final revenge the women take feels more of a collectively acknowledged effort; in its predecessor, the architects were left almost in a state of denial that they could possibly have done something so savage, hormones gone wild or not. Like the lack of steaminess, it’s not a change for the better.

Coppola seems much more interested in how her characters look than what they feel. There’s no denying, this looks striking, events unfolding in an eerie calm, with the Civil War only marching past the gates or, occasionally, rumbling in the distance like thunder. Yet it’s all too subdued and calm for its own good. For the story to work, you need to have a sense of the passions involved, rising to the point that they overwhelm all common sense on both sides of the gender divide. I rarely if ever got that here, and as a result, when things eventually kicked off, they felt contrived at best. Amy’s presence in McBurney’s bed felt more like a plot device than an inevitable result of what had gone before.