Truly the epitome of a one-joke movie, this would have been a fun 10-minute short film. Unfortunately, it runs 85 minutes, and the additional hour and a quarter add almost zero in terms of comedy, horror or anything else. Here, Johnny (Ray) and Michelle (Compton) are employees of a particularly crap donut shop, at which Johnny’s mad scientist uncle Luther is a customer. He’s working on a reanimating serum – yes, it is glowing green – and during an altercation in the store, the serum flies unnoticed into the fryer where there’s a batch of donuts cooking. The resulting confections turn anyone who eats them into zombies with severe digestive problems; worse still, the cakes themselves develop self-awareness, mobility and a ring of fangs around their little donut holes. 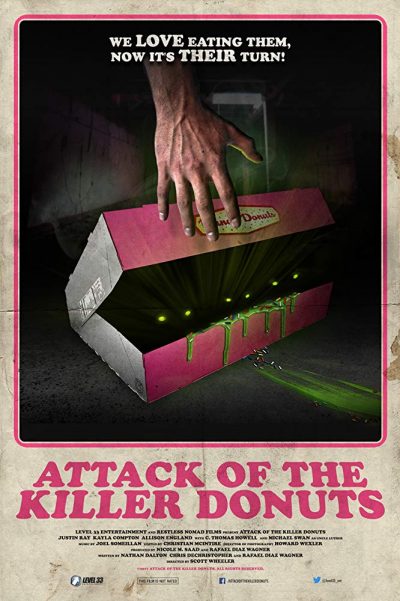 The big lesson to be learned here, is that a goofily dumb concept isn’t enough for a movie, no matter how cute the title and poster (and, yep, there’s no denying, it scores well in both categories). For just about everything else in the film struggles to reach below average, beginning with the script. There’s no sense of escalation at all, save the film throwing a higher number of (poorly CGI’d, for the most part) donuts across the screen. How difficult would it have been to have the movie finish with the characters being chased by a giant glazed through the streets of the town? Look, if Rubber can turn a tyre into a menacing adversary – hell, even the most obvious influence here (along with Gremlins), the Killer Tomatoes franchise, did a far better job of creating a threat. Admittedly, they did have George Clooney…

It might be salvageable, if the characters were people with whom you enjoyed spending time. They aren’t, beginning with a startlingly non-heroic hero. We’re supposed to have sympathy for Johnny, because his “girlfriend” only uses him to get money – my actual reaction was, “I see her point.” Michelle fares a little better, at least showing some spark when dealing with obnoxious customers, though the third member of the trio, Howard (Heyman), has a crush on Johnny’s mother which is more creepy than anything. Howell shows up as one of the town cops, causing me to wonder what exactly he was doing in this. [The correct answer is, “Working.”] It does provide an example of the low-hanging fruit at which the film aims, in that he and his colleague are named Officers… Wait for it… Rogers and Hammerstein. Oh, hold my sides, for I fear they may split.

Set in a small town where the population is apparently 12 – literally, everyone in the movie is in the movie – this manages to occupy the uncomfortable spot below being any good, yet clearly failing to reach “so bad it’s good” levels of incompetence. It just sits there, like a box of last week’s crullers in your company’s break-room. At least I’m sure the cast and crew never had to go hungry during the shoot.