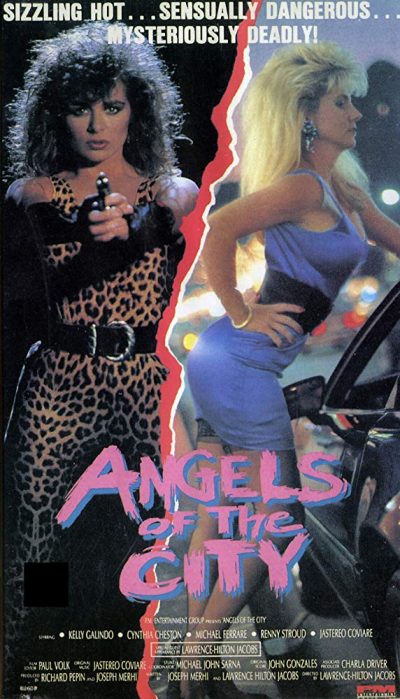 In his defense, it appears the character he plays here, Detective Jon Chance, also appeared in L.A. Heat and L.A. Vice the same year, other productions by PM Entertainment. So I guess if your were a fan of the company, this might actually be a plus point. PM had recently been founded by Joseph Merhi and Rick Pepin, and were busy churning out straight-to-video features – they helped break Cynthia Rothrock into the US market. Associate producer Richard Munchkin once said of PM’s productions, “Somebody had to either be shooting, chasing, or fighting every seven minutes, and, if it was quicker than that, even better.” I didn’t hold a stopwatch for Angels of the City, but suspect it reaches the required rate.

Whatever his talents may be on the directing front – and those seems pretty shaky – they are Oscar-worthy in comparison to his musical abilities. For your listening “pleasure” – and quotes have rarely been used more advisedly – below is the theme to Angels of the City, written by Jacobs and performed by Jastereo Coviare, who plays a henchman. Even by the low standards of this genre and time… it’s bad. By the point this shows up, we already have had the first shooting/chasing scene, as a hooker sees a potential trick go bad, when he starts blasting at her with a shotgun and hunting her along the mean streets of Hollywood. God forbid she… enter a building, or… I dunno, go anywhere a car can’t follow. Hey, I guess ladies of the night aren’t the brightest bulbs in the box.

It does establish that the student escapades which follow are probably a poor decision on the part of those involved. For, as initiation into an exclusive sorority, Cathy (Galindo) and Wendy (Cheston) are ordered to dress up as hookers themselves, and can’t come back until they’ve made a hundred bucks. Personally, I’d have headed for the nearest ATM, and come up with a good story. But, hey: I guess Californian co-eds aren’t the brightest bulbs in the box, either. So they actually head down to the seediest part of town. This is a bad move, because there is currently a turf war going on between two pimps, Gold (Ferrare) and Lee. The shooting which opened proceedings was one in an escalating series of what I guess should be called tit-for-tit attacks; Cathy and Wendy have just stumbled into the middle of the spat.

The pair are abducted by Mr. Gold, who thinks they are working for Mr. Lee. A subsequent showdown between the pimps ends in a gun-battle, and the death of Lee. So much for that subplot, which doesn’t even make it to the 40-minute mark. Cathy and Wendy escape in the confusion, stealing Gold’s Rolls-Royce, and that sets up the film’s actual story: their efforts to get back to the nice side of town, while Gold and his minions pursue them [There’s a subplot involving C+W’s boyfriends, who have sex with a prostitute subsequently murdered as part of the feud. It’s only purpose is to shoehorn Detective Chance into the film. It may safely be ignored, except for the remarkable demonstration of sexual gurning performed by one of the young men]

This could probably be retitled Poor Decisions of the City and be considerably more accurate. For the remainder of the story relies on our heroines making one bad choice after another. Abandon your means of transport! Walk down deserted alleys! Trust everyone you meet! Go to sketchy after-hours nightclubs! It begins to feel like an educational film on urban safety: I kept expecting a narrator to chime in, solemnly: “Now, let’s see what Cathy and Wendy should have done…” With Gold harrying them all of the way, this ends in a surprisingly impressive three-car stunt, with two cars colliding and bursting into a giant fireball, before a third flies through the air above them. This kind of vehicular mayhem, low-budget yet effective, became another of PM’s trademarks. 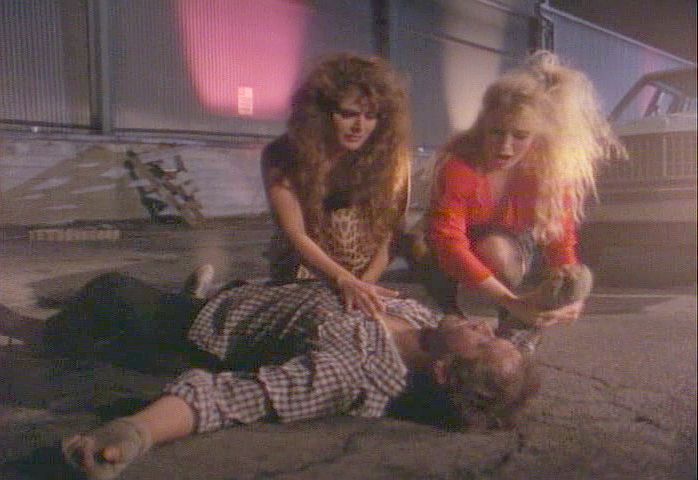 Oddly, while it feels like this should be the climax of the film, with the girls safe and Gold in custody, it takes place around the 65-minute mark. I wondered if Jacobs was going to adopt the Peter Jackson approach, and give us half an hour of hugging and Det. Chance wishing Cathy and Wendy a fond farewell. Albeit a fond farewell with shooting, chasing, or fighting every seven minutes. Instead, there’s an odd coda where Cathy returns to her sociology class, and delivers a moral lecture about the life-lessons she has learned from this experience. Before we get there, however, Gold is released on bail, and becomes a member of the Poor Decisions Party. He opts to take revenge on Cathy personally, despite the member of LA’s finest who has become her guard-with-benefits.

To avoid spoilers, I won’t describe in detail how this goes. However, I am pleased to see that the writers were apparently taking notes from Chekhov, who famously wrote, “If in the first act you have hung a pistol on the wall, then in the following one it should be fired.” Though in this case, the rule followed needs to be called Chekhov’s Speargun. Even though Cathy had “just moved in,” and “hasn’t had time to settle down,” decorating with aquatic offensive weapons was apparently a top priority. As soon as the gratuitous weapon appears, you know how things will end. And unlike just about every other aspect, the movie does not disappoint there.

Probably the biggest failing this has is an inability to commit to an approach. Is this a gritty saga of life on the seedy side of the streets? A frat-boy sex-comedy like Porky’s? A knock-off of After Hours? The movie gestures, in an apathetic and unconvincing fashion that’s little more than a shrug, at each of these without much enthusiasm. While generally competent enough given the limited resources, the inexperience of those involved is apparent. This is the kind of film that makes such a minimal impact, I had to watch it twice to write this review. Safe to say, that’s twice more than it’ll be watched again.