A wonderful title, and an amusing concept suddenly goes off the rails thanks to a godawful performance from Assante. He mumbles his lines like Rocky Balboa after 10 rounds with Ivan Drago [Fun fact: Assante’s first on-screen role was alongside Stallone, in Paradise Alley]. And that’s even discounting an accent which is remarkably thick for someone born and brought up in New York. That’s probably getting ahead of myself. Let’s begin with what works. 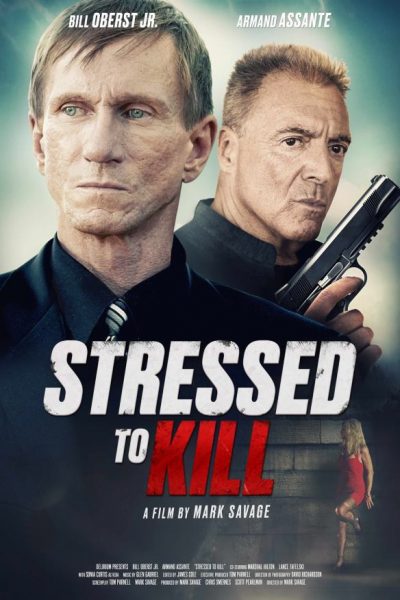 Bill Johnson (Oberst) just wants a quiet life. However, life has other plans, and this fire-safety equipment worker is beset on all sides by idiots and assholes. The pressure eventually triggers a coronary, and Bill is warned by his doctor that he must find a way to get these stressful influences out of his life. While chasing down a man who spilled a drink on him, Bill sees the man gets run over, and is consequently overwhelmed with a sense of peace and fulfillment. An idea hatches. Helped by his pal, Stan (Hilton), he acquires a mini blow-gun and a set of poison-tipped darts. Bad drivers. Aggressive cell-phone users. People who talk in the cinema. Cheating wives, be it his own (Curtis) or Stan’s trio of ex’s. All are candidates for Bill’s game of darts.

Obviously, the trail of corpses eventually attract the attention of the cops. That’s where Assante shows up, as Detective Paul Jordan, with only about every other word semi-audible. He turns out to be a bigger wild-card, and probably also considerably more psychopathic than Bill. Jordan seeks to create some kind of bond with Johnson – who, for obvious reasons, wants nothing to do with the policeman. But what is the detective’s motivation? Aw, who cares. We more or less gave up on trying to figure out even what Assante’s character was saying, and had more fun yelling “Mumbler!” at the TV, Willie Wonka-style.

It’s a shame, as there’s a particularly interesting undercurrent here, in Bill’s choices of target. He begins with those to whom no sane person could really object: I mean, using your cellphone during a movie needs to be a capital offense. However, the deeper in we get, the more morally questionable things become. Yet we, as an audience, are committed by this point to empathizing with the killer, an aspect helped significantly by Oberst’s very grounded performance.

Unfortunately, Assante’s impact is a clear negative, and feels more like a cynical effort by a has-been to steal the film out from under its lead. I can perhaps see what the aim of his character might have been, but in the end, all his ranting and incoherent raving fails to deliver. The film would have been perfectly fine, say, with a normal cop investigating these crimes, countered by Bill’s efforts to divert suspicion, which eventually lead to the framing of a not-so-innocent bystander. A salutary reminder that less can be more. Especially when it comes to once-famous actors.