I’ve made a terrible mistake. Going off the title, and a synopsis which seemed to bear more than a slight resemblance to The Hangover, I thought this had the potential to be a lightly amusing bit of fluff. But the deeper I went into this, the more obvious it became that this was less inspired by The Hangover, than a wholesale rip-off of it – right down to a supporting role by a tiger-owning Mike Tyson. And to call this painful and overwrought would be a massive understatement. When a former heavyweight boxing champion is, far and away, the best actor in a film, you’ve got problems. There is one genuine laugh: a scene paying homage to God of Gamblers, complete with chocolate. Otherwise, I hope you like comedy about projectile vomiting onto a corpse. Because you get comedy about projectile vomiting onto a corpse. 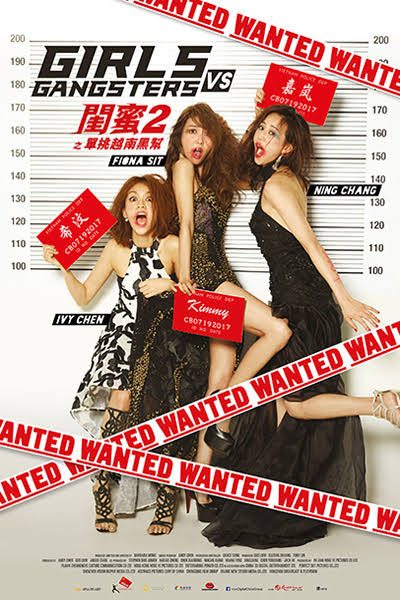 As a bachelorette party Xiwen (Chen) goes to Vietnam along with her best friends Kimmy (Sit) and Jialan (Chang), who hate each other, and her fiancé’s teenage sister, Jingjing. They get invited to a lavish party held by a mobster (Tran), at which much alcohol is consumed. Minus Jingjing, the other women waked up, naked, buried in sand on the beach, chained both to each other and a lock-box which contains a hundred gold bars. [Let’s ignore that, even at a conservative twenty pounds for a bar, this would weigh close to a ton, and they’d need a small van to carry it] They have no memory of what happened the night before. One has a tattoo of a man on her back. What happened, and where did Jinging go? Complicating matters, the mobster, believing they were responsible for stealing a ruby ring, has sent his henchwoman on their trail.

To a degree which is almost admirably relentless, hilarity fails to ensue. This is supposed to be a sequel to 2014’s Girls, which I haven’t seen. I can’t imagine it offered the same volume of unfunny, low-brow comedy, and with a 113-minute running time, that’s a lot of jokes falling flat. You could easily lose a lot, and the film would be all the better for it. 110 minutes less might be a good way to start. If ripping The Hangover off wasn’t enough, the film then adds insult to injury by throwing in a Brewster’s Millions knock-off subplot toward the end, with the trio ordered to spent the gold bars in 24 hours. More hilarity fails to ensue – this is how we get the previously mentioned scene, climaxing in one of them throwing up on a corpse. Don’t ask.

Tyson, playing a half-Chinese character called Dragon, is a refreshing breath of fresh air. He’s a retired beach-bum whose entire wardrobe consists of boxing shorts, and has to get the girls to open bottles, because his hands are all busted-up. If only the same ability to play against stereotypes had been present elsewhere: instead, it only makes the rest of the film all the more cringeworthy.