After an indeterminate epidemic has wiped out almost all the population, Del (Dinklage) is the last occupant of his town. A former library employee, he spends his days clearing houses one a time, burying the dead and generally keeping the area in a managed state. He’s fine with this, having never been a particularly social animal to begin with. However, the solitude is broken by the arrival of Grace (Fanning), who is everything that Del is not [when she asks him what he misses the most, his reply is pointed: “Quiet”]. Despite initial qualms, he allows her to stay, and Grace joins him in his duties. However, then her parents (Giamatti and Gainsbourg) – or, at least, people claiming to be her parents – also show up, and the dynamics are forever altered. 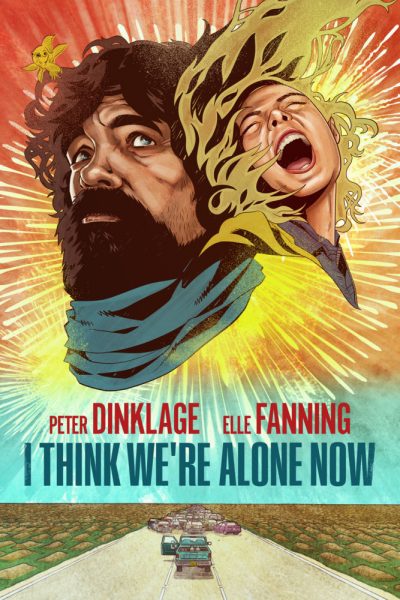 I was about to write that this was the first thing outside Game of Thrones in which I’ve seen Dinklage take a starring role. But I had apparently forgotten about Knights of Badassdom. And Pixels. This continues an unfortunate trend, in which Dinklage has been good in films which aren’t. I initially thought things might be different here. For there’s definite intrigue at the start, when you’re watching him amble around town, largely unfazed by the apparent apocalypse. It’s testament to the strength of his acting ability – and Morano’s talents, particularly as a cinematographer – that the complete lack of dialogue for almost 14 minutes works to the film’s benefit.

However, the further things drift from this unsettling silence and isolation, the more ‘normal’ the film becomes, robbing the movie of its effectiveness. It can stand the arrival of Grace, mostly because the contrast in the pair of characters is not ineffective:
“Has anyone ever told you you’re kind of a weird guy?”
“Yeah. But they’re all dead now.”
It’s when two becomes four that the film falls apart, as if Morano had started filming without checking whether writer Mike Makowsky had bothered to come up with an ending. There’s a somewhat interesting thread, concerning whether this was quite the global wipe-out Del believed. This is rapidly discarded, in favour of a finale that had me scratching my head, trying to work out the logic behind it. This includes the ease with which Del goes from the Hudson Valley to Palm Springs, crossing the continent in two minutes. Maybe there was a dragon involved somewhere?

It is definitely a shame. Dinklage deserves better, as does Fanning to a lesser extent. Indeed, the entire first half deserves better. Not least for being one of the few post-apocalyptic movies even to hint that the apocalypse might not be a universally bad thing for everyone. It’s a particular pity to see a story which started off so intent on carving its own path in a decimated world, ending up heading inexorably back to the road more travelled. This highway is one with which we are already far too familiar, populated by threatening strangers and communities that are not the idyll they promise to be.